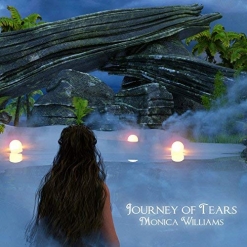 Monica's Website Monica's Artist Page on MainlyPiano
Album Links
Amazon (referral)iTunesHeartdance Records
This site contains affiliate links to products. We may receive a commission for purchases made through these links.
Journey of Tears
Monica Williams
2018 / Heartdance Records
50 minutes
Review by Kathy Parsons
Journey of Tears is the first solo album from composer/flutist Monica Williams. Monica and Wendy Loomis co-founded the piano/flute duo, Phoenix Rising, and released three albums under that name between 2005 and 2016, earning a number of award nominations. Classically-trained at the Eastman School of Music, Williams is a freelance flutist in the SF Bay Area and has a teaching studio with about 35 students. Monica’s collection of at least seventy flutes includes bamboo, Native American, pan, alto and bass flutes in addition to her C flute. Her newest addition is a hybrid flute extension called the “Zi Fi,” which is a fusion flute that crosses a traditional flute with a Chinese Dizi and a reed instrument. This is one of several featured flutes on Journey of Tears. Guest artists include Sherry Finzer on bass flute, Darin Mahoney and Michael Selig on guitars, and vocalist Alexa Nadramia. As the album’s title suggests, many of the ten original tracks are poignant and heartfelt as well as being soothing and achingly beautiful.

Journey of Tears begins with a thunder clap and the sound of rain before the flute begins over a steady synth drone on “Raining Tears.” Composed after a major loss in Monica’s life, it expresses a natural sadness while looking for “peace and tranquility in the storm of life.” The nature sounds continue throughout the piece, obviously providing a metaphor for life’s sometimes painful difficulties. “Conversations Within” is one of my favorites and features Michael Selig on acoustic guitar in addition to two different flutes played by Williams. The flute with the higher voice represents the desire for growth and change while the lower flute is resisting that change. I really love the rhythmic, soaring quality of this one! Sherry Finzer plays bass flute and Darin Mahoney plays guitar on the haunting and very peaceful “New Horizons,” a piece inspired by the new friends and fresh ideas that came about as a result of attending the Zone Music Reporter Awards. “Unconditional Love” is a loving tribute to Monica’s parents. Very poignant and deeply emotional, and the flute expresses so much in this “song without words.” My favorite track is “On the Edge,” a piece about the artist’s struggle with anxiety. The flute is trying to reach out for help as a drum beats rhythmically with the relentless intensity of an anxious heartbeat. Synth washes add subtle colors to this amazing piece. “Finding Peace” effortlessly floats on a cloud of forgiveness after letting the hurt and anger go. On “Constant Change,” many different Native American flute voices represent the constant change and evolution we all experience in life. “The Great Beyond” features the wordless vocals of Alexa Nadramia along with flute, Darin Mahoney’s guitar, synth effects and instrumentation, and occasional percussion. Much more ambient than most of the album, this eight minute piece reflects on the higher purpose of life and brings this excellent album to a close.

Journey of Tears is available from Amazon, iTunes and Heartdance Records.
October 9, 2018
This review has been tagged as:
Kathy's Favorites: 2018Kathy's Picks
Monica's Website Monica's Artist Page on MainlyPiano
Album Links
Amazon (referral)iTunesHeartdance Records
This site contains affiliate links to products. We may receive a commission for purchases made through these links.