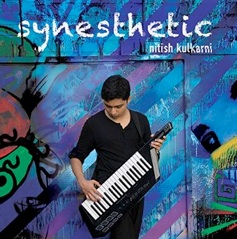 Nitish's Website Nitish's Artist Page on MainlyPiano
Album Links
Amazon (referral)iTunes
This site contains affiliate links to products. We may receive a commission for purchases made through these links.
Synesthetic
Nitish Kulkarni
2014 / Eversound
46 minutes
Review by Michael Debbage
The title of this highly impressive debut from 20 year old wunderkind Nitish Kulkarni is defined as relating to or experiencing synesthesia which invokes the experience of involving more than one sense. From the music to the album title, the two completely mirror image themselves by facilitating the use of a melting pot of multiple instruments from the east to the west along with a heavy use of cross rhythms that screams early sleeper hit for 2015.

Kulkarni’s keyboards are featured throughout this impressive debut that focuses prominently on that plucked dulcimer effect that Yanni made so popular. The unabashed admiration to the previously mentioned artist is extended to the liner notes too. However Nitish avoids making his sound one dimensional and supplements his keyboard work with John Adorney’s guitar and cello work throughout the album though respectively more prominently on “Raining Fire” and “As The Water Lillies Grow”.

Nevertheless all the music is composed and arranged by this impressive newcomer who effectively merges eastern sounds into a western landscape stamping and asserting his own musical DNA to avoid being just a clone. By the end of the year many will be speaking highly of Kulkarni and Synesthetic and assuming he has the ability to follow up this impressive debut watch out musical world.
February 22, 2015
This review has been tagged as:
Debut AlbumsMichael's Favorites: 2015
Nitish's Website Nitish's Artist Page on MainlyPiano
Album Links
Amazon (referral)iTunes
This site contains affiliate links to products. We may receive a commission for purchases made through these links.