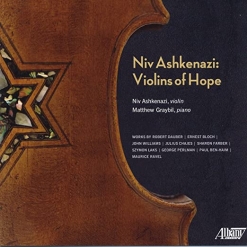 Niv's Website Niv's Artist Page on MainlyPiano Matthew's Website Matthew's Artist Page on MainlyPiano
Album Links
Amazon (referral)iTunesSpotify
This site contains affiliate links to products. We may receive a commission for purchases made through these links.
Violins of Hope
Niv Ashkenazi and Matthew Graybil
2020 / Albany Records
59 minutes
Review by Kathy Parsons
Violins of Hope is an amazing album by violinist Niv Ashkenazi with pianist Matthew Graybil, both Juilliard graduates. The album’s title comes from an artist and educational project that showcases instruments that were owned by Jewish musicians before and during the Holocaust. Violins in the collection were played in the concentration camps and ghettos, providing a source of comfort for some and a means of survival for others. The project was founded by Amnon Weinstein and his son, Avshalom, Israeli luthiers who collect these instruments, refurbish them to concert quality, and take them to communities all over the world so that their voices can be heard again. This is the first solo album to be recorded on one of these instruments, and Niv Ashkenazi in the only violinist in the world to have a violin from the collection on a long-term loan. The album was conceived as a way to create a lasting record of the voice of that violin. The Weinstein Family has said: “Niv is the only violinist we trust absolutely to bring out the sounds of long gone horrors, with an honest sound and much love for this music and our legacy.”

The fourteen tracks on the album were chosen to reflect the life and experiences of the violin, which was built in eastern Europe or Germany between the years of 1900 and 1929 and has a what looks like an inlaid Jewish star on the back. All of the music on the album was composed by Jewish composers, many of whom were directly affected by the Holocaust. One of the missions of the Violins of Hope project is for silenced voices be heard again.

All of the music on Violins of Hope is outstanding, but I’ll mention a few examples. The album begins with “Serenade,” the only surviving work by Robert Dauber. The piece was composed in 1942 while Dauber was interned in Theresienstadt. He died of typhoid a few years later, at the age of 26. Graceful and lyrical, it gives voice to a beautiful dialog between the violin and piano.

“Theme from Schindler’s List” by John Williams is the most familiar piece on the album. The melody was written for Itzhak Perlman, one of Ashkenazi’s teachers. Niv first performed it while studying with Perlman, who encouraged him to find his own interpretation of the piece and refused to share his bowing and fingerings with his student. In the meantime, Niv has certainly made the piece his own, expressing profound emotions and the tragedies of that time.

“Bestemming: Triumph” comes from Sharon Farber’s concerto for cello, narrator and orchestra and tells the story of her friend, Curt Lowens. Farber was commissioned to arrange the last movement for violin, four-hand piano and narrator for this project. She (piano) and actor Tony Campisi (narrator) joined Ashkenazi and Graybil in performing this profoundly moving work.

Paul Ben-Haim has four of his pieces included on the album - the gorgeous “Berceuse Sfaradite,” an arrangement of a Sephardic folk song and “Three Songs Without Words” (“Arioso,” “Ballad” and “Sephardic Melody” - all deeply moving.

Violins of Hope is an incredible musical experience from the first note to the last, and I sincerely hope it reaches the ears and hearts of people all over the world. It is available from Amazon and iTunes, as well as Spotify and other streaming platforms. I give this album my highest recommendation.
June 23, 2020
This review has been tagged as:
ClassicalKathy's Picks
Niv's Website Niv's Artist Page on MainlyPiano Matthew's Website Matthew's Artist Page on MainlyPiano
Album Links
Amazon (referral)iTunesSpotify
This site contains affiliate links to products. We may receive a commission for purchases made through these links.