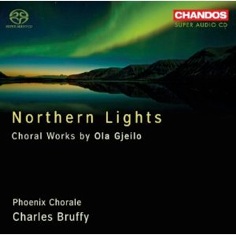 Ola's Website Ola's Artist Page on MainlyPiano
Album Links
Amazon (referral)iTunes
This site contains affiliate links to products. We may receive a commission for purchases made through these links.
Northern Lights
Ola Gjeilo
2012 / Chandos Digital
59 minutes
Review by Michael Debbage
Choral work is not the most commercially viable music and if your intent is to fulfill the musical appetite you sort via Gjeilo’s outstanding 2007 effort Stone Rose, then this might not be the album for you. But do not let that stop you in your tracks because much like the aforementioned, the production of Northern Lights is mesmerizing. Equal to the technical aspect is the simply gorgeous song “The Ground” which on its own makes the adding of this compelling recording to your musical library worthwhile.

While this album’s main focus is choral and lightly orchestrated arrangements, this does not stop the Norwegian pianist and composer Ola Gjeillo from laying his musical DNA and fingerprints upon Northern Lights. The album launches in grand style courtesy of the previously mentioned composition “The Ground” that features Ola on the piano who is in complete unison with the heavenly choral work and stirring string arrangement. This will likely trigger an emotional response of tears to the eyes or shivers across the skin that could arguably draw bragging rights for 2012’s song of the year.

While the eleven track album only features Ola three times performance wise, it also includes the famous Phoenix Choral conducted by Charles Bruffy. They can best be heard courtesy of the title track that will transport you to heavenly places. But if you truly want to be challenged then seek out the lengthier and progressive “Dark Night Of The Soul” that also features Gjeilo on piano along with soprano Alison Chaney and the Harrington String Quartet. Clocking in at over 12 minutes it is certainly the central composition of Northern Lights.

Despite the challenge of incorporating the saxophone with choral work, Northern Light closes out successful with “Evening Prayer” featuring Ted Belledin on the tenor sax and Gjeillo once more on the piano. And while this album may not be for everyone, this is once again compelling evidence that Ola Gjeillo is a very special composer who will not stereotype himself but would rather fulfill his wanderlust of varying musical terrain.
October 14, 2012
This review has been tagged as:
Michael's Favorites: 2012
Ola's Website Ola's Artist Page on MainlyPiano
Album Links
Amazon (referral)iTunes
This site contains affiliate links to products. We may receive a commission for purchases made through these links.
More reviews of Ola Gjeilo albums 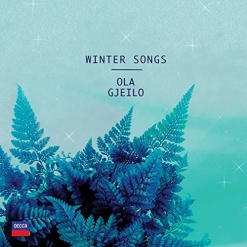