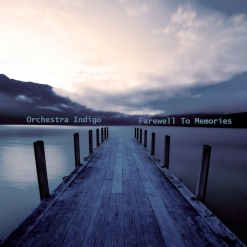 Orchestra Indigo's Website Orchestra Indigo's Artist Page on MainlyPiano
Album Links
Amazon (referral)SpotifyApple/iTunes
This site contains affiliate links to products. We may receive a commission for purchases made through these links.
Farewell To Memories
Orchestra Indigo
2022 / Richard K Randlett
54 minutes
Review by Kathy Parsons
Farewell To Memories is the debut album by Orchestra Indigo, an ambient music project created by singer/songwriter, guitarist and pianist/keyboardist Rick Randlett. Rick released his fifth blues/rock album under his own name in early 2020, at about the same time live performances came to a screeching halt with the Covid-19 pandemic. Accustomed to playing as many as 125 live dates a year, Rick wondered (as did so many musicians world-wide) what he would do next. In his home studio, he began experimenting with ambient and new age music styles, combining piano melodies with synthesized orchestration and creating instrumental music that was much different from the blues styles he was so accustomed to. He chose the name "Orchestra Indigo" for its mysterious quality and to keep from confusing fans of his blues music as well as new fans to his instrumental creations. A lifelong musician from the age of eight, Rick earned his a Bachelor’s Degree in Music Education from Keene State College in New Hampshire, and also did graduate work in Theory and Composition at the University of Massachusetts.

Several of the twelve pieces on the album reflect on growing up in New England. Quoting Rick Randlett: "Farewell to Memories is an attempt to look at a period in my family's history through music. I truly believe that the idea of memories of a time and place lost forever is truly universal." Deep reflection and pondering all of the changes life brings can evoke powerful emotions as well as introspection, and this music combines all of those elements into a very beautiful musical creation.

Farewell To Memories begins with the title track, which was inspired by a visit to the area where Rick grew up after his mother passed away a few years ago. Seeing how much has changed can be nostalgic as well as a bit overwhelming, and this lovely piece expresses that very well. "Distant Worlds" is more than a little mysterious with a repeated piano pattern over strings and various synth voices - it would be great in a tense, scary scene in a movie! "In the Aftermath" is also on the dark, mysterious side, but seems to be arising from a difficulty that recently passed. "A Time of Solitude" does a great job of conveying the feeling of being alone. Sadness and a sense of loss flow through the stillness - poignant and very expressive! "Twilight Falls" paints a peaceful picture of that time of evening when the world prepares for the night. "Daybreak" begins as a very quiet keyboard melody, gradually adding strings and other orchestral sounds as the sun rises and the earth reawakens. "A Perfect Summer Day" is warm and lazy and almost smiles - no stress and no hurry - a musical "ahhhhhh!" I love "Hope Eternal"! Moving slowly through dark passages that seem to express a heavy sadness, the piano melody continues to go forward - gorgeous and deeply emotional! "One Last Look" was inspired by leaving a beloved place from childhood and realizing he'd probably never return. That rush of emotion is expressed with tenderness and love - a great close to an exceptional album!

Farewell To Memories is something special and is available from Amazon, Apple Music/iTunes and various streaming sites including Spotify. Check it out!
September 12, 2022
This review has been tagged as:
Debut AlbumsLatest Reviews
Orchestra Indigo's Website Orchestra Indigo's Artist Page on MainlyPiano
Album Links
Amazon (referral)SpotifyApple/iTunes
This site contains affiliate links to products. We may receive a commission for purchases made through these links.