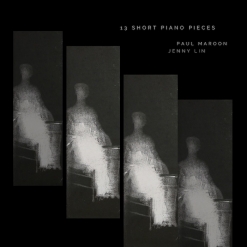 Paul's Website Paul's Artist Page on MainlyPiano Jenny's Website Jenny's Artist Page on MainlyPiano
Album Links
Amazon (referral)Apple/iTunesSpotifyAlfama videoEl Raval video
This site contains affiliate links to products. We may receive a commission for purchases made through these links.
13 Short Piano Pieces
Paul Maroon and Jenny Lin
2022 / Maroon Music
27 minutes
Review by Kathy Parsons
13 Short Piano Pieces is the debut collaborative album by Paul Maroon (composer) and Jenny Lin (pianist). Dedicated to Paul's mother, who fought with Paul nightly when he was a kid to keep him learning the piano (I'm sure his piano teacher appreciated that!), it's been a lifelong dream of Paul's to write a collection like this one and dedicate it to her. All thirteen piano solos are named for places where Paul has lived in the US, Canada and Spain. Sometimes dark and pessimistic, sometimes on the absurd side, and sometimes quite beautiful, the music is a mixed bag that would likely be considered Modern Classical music, but it doesn't fall neatly into any specific genre (I like that!). The album was recorded using old techniques, old microphones and tape machines. Most piano albums are recorded so that the piano sound is consistent from one track to another, but there is a different recording approach used for each piece on this album. This differences aren't jarring, but they are perceptible.

Based in Seville, Spain, Paul is best-known as a member of the rock group The Walkmen and for scoring the Oscar-winning documentary, Heaven is a Traffic Jam on the 405. Jenny Lin is an internationally-celebrated concert pianist based in New York City with more than forty recordings in her discography. She has worked closely with American composer Philip Glass and serves on the faculty of the Mannes College at the New School for Music.

13 Short Piano Pieces begins with "Mile End," a piece that feels very sad to me. It begins with runs on the piano that are a bit chaotic, but then becomes very introspective and calm - and sad. "El Raval" is named for a dirty Barcelona neighborhood and is fast-paced with a counter-melody that tries to keep it grounded, ending abruptly. "Charles Village" is actually quite beautiful and is more subdued. Bright and playful, "Rose Park" reflects on the area near where Paul grew up. "Riverside Drive" is also lively and cheerful, dancing freely up and down the piano keyboard. Rather stark yet melodic, "Alfama" was inspired by an area in Lisbon. There is a music video for this piece. "Triana" tells the story of a fight between a lizard and a cockroach outside Paul’s storage space office. Just over a minute and ending abruptly, it must have been quite a battle! The very spare "Delancey Place" is both peaceful and dark - a favorite. "Morningside Heights" has a very classical feeling - quick and quite Baroque. There are modern elements, too, making it a really interesting piece! "The Irish Channel" was named for an area in New Orleans where Paul lived when his daughters were small. It was composed to sound like an improvised lullaby and ends the album very peacefully.

13 Short Piano Pieces is often edgy but always interesting! It is available from Amazon, Apple Music/iTunes and streaming sites such as Spotify. Check it out!

November 21, 2022
This review has been tagged as:
ClassicalDebut AlbumsLatest ReviewsModern Classical
Paul's Website Paul's Artist Page on MainlyPiano Jenny's Website Jenny's Artist Page on MainlyPiano
Album Links
Amazon (referral)Apple/iTunesSpotifyAlfama videoEl Raval video
This site contains affiliate links to products. We may receive a commission for purchases made through these links.