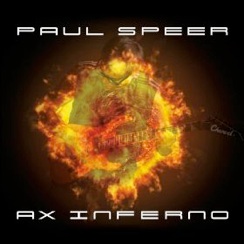 Paul's Website Paul's Artist Page on MainlyPiano
Album Links
AmazoniTunes
This site contains affiliate links to products. We may receive a commission for purchases made through these links.
Ax Inferno
Paul Speer
2013 / Rainstorm Records
48 minutes
Review by Kathy Parsons
At first glance, my reviewing Paul Speer’s new Ax Inferno might seem a little out of character, but I still have Speer’s early recordings with David Lanz and clearly remember his distinctive guitar sound. I also have one of Speer’s first solo releases, Collection 991: Music+Art (1995), so when he approached me about reviewing his newest album, I was intrigued. This big, bold rock epic is all Paul Speer on guitar, bass, and synthesizers with the exception of four tracks that feature Ron Krasinski on drums. (Lanz is listed as one of the executive producers, so maybe this isn’t that much of a stretch after all!)

Ax Inferno is Speer’s fourth independent release, and his fourteenth commercial release overall. The producer for more than 250 projects, Speer is a two-time Emmy winner and a Grammy-nominee for his work in the contemporary instrumental genre. As an artist and producer he earned gold and platinum awards for Cristofori’s Dream, Desert Vision, and Natural States, all projects with David Lanz.

My favorite place to listen to hard-driving music is in the car on the Oregon Coast with the sun roof open and the CD player up as loud as I can stand it - a great listening “room”! Speer is a consummate musician in many genres, making it even more fun to just let the music play while the powerful rhythms mesmerize. Ax Inferno is sophisticated rock infused with strong techno underpinnings that take the listener on a futuristic journey.

Ax Inferno begins with “Contents Under Pressure,” a rock guitar tour de force that should get the toes tapping and the pulse pumping. “Behind the Waterfall” this ISN’T, but what a fun and exciting ride it IS! “Accelerator” cranks it up another notch with a dark, high energy rocker that really cooks. “Tornado Warning” starts out with the closest thing to rhythmic ambient music on the album, but doesn’t stay there very long. Intensity builds as the music progresses, sending out vibes of impending danger as the storm approaches. “Vortex” slows the tempo a bit, but is no less driving with powerful drums and incendiary guitar. “PowerGlide” is pure rock bliss. Great guitar work mixes with organ and intoxicating rhythms - very intense! “Megatron” all but explodes with fiery guitar licks and a back beat that won’t quit. The last two tracks are techno mixes of “Contents Under Pressure” and “Accelerator” - excitement set to music in a very big way!

Okay kids, this isn’t music to go to sleep to, but it will get you up and dancing as a wake-up! Guitarman Paul Speer is still very much a musical force to be reckoned with, so if you like hard rock instrumentals, be sure to check this one out! It is available from paulspeer.com, Amazon, and iTunes. Highly recommended, but not for massage or meditation!
August 13, 2013
This review has been tagged as:
Guitar music
Paul's Website Paul's Artist Page on MainlyPiano
Album Links
AmazoniTunes
This site contains affiliate links to products. We may receive a commission for purchases made through these links.