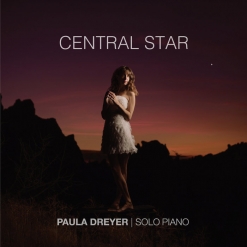 Paula's Website Paula's Artist Page on MainlyPiano
Album Links
Amazon (referral)Apple/iTunesSpotify"Central Star" Sheet Music
This site contains affiliate links to products. We may receive a commission for purchases made through these links.
Central Star
Paula Dreyer
2020 / Paula Dreyer
45 minutes
Review by Kathy Parsons
Central Star is the first album from pianist/composer Paula Dreyer, an artist with an extensive and very impressive musical resume'. Classically-trained from childhood, Dreyer seeks to "inspire, include and connect individuals through music." Her unique sound is the result of a wide range of influences from the Romantic and Impressionistic composers, film composers, Spanish music and solo improvisation albums from the masters. The Dreyer family moved often when Paula was growing up, so she worked with many different piano teachers - experiences that add to the diversity in her music. She also studied at Interlochen as a teenager. It was interesting to learn that Paula spent quite a few years in the SF Bay Area performing and teaching as well as playing for Beach Blanket Babylon, the longest-running musical review in history. She also played regularly with the Santa Rosa Symphony, performed with innovative chamber ensembles and accompanied private school choirs. She is now living in Oregon. Paula calls the fifteen piano solos that make up Central Star "a cathartic, therapeutic set of compositions that serves as an emotional and creative outlet in my adventure as a solo composer." In addition to this recording, Paula is the composer of a series of piano books called Little Gems for Piano: Rote Pieces that Motivate and Captivate. Sheet music from the Central Star album is also available.

The album begins with "Sound of Stars," a piece with a very bright, twinkling effect. Lively and energetic in some passages and much smoother and dreamier in others, it's a beautiful and intriguing opener! (It's also a lot of fun to play!) "Rainbow Ridge" sparkles with lively notes in the upper range of the piano keyboard and expresses an easy-going, carefree outlook. "Lost At Sea" is much darker with a mournful melody and a broken chord rhythm that suggests the rocking motion of a boat - another favorite! "Forrest in the Forest" was written for Forrest Kinney (1957-2019), an educator, author, pianist, composer and presenter who lived in the mountains east of Seattle and believed that all we really need are "a sense of gratitude for the gift of life and a sense of purpose." The piece tells the story of someone who lived a simple yet enormously creative life. "Under a Flamenco Sky" is a trilogy with a distinctive Spanish flavor. It begins with "Duende Flamenco (Flamenco Soul)," a darkly passionate slow dance overflowing with mystery. "Tango Azul (Blue Tango)" smolders intensely with beauty and grace. "Fuego Interno (Internal Fire)" is the aptly-titled third part of the trilogy.

Paula Dreyer calls "Revolt and Reveal" her most complex piece. "This piece is a triumphant story that deals with universal feelings of uncertainty, appreciating lapsing moments of simple beauty, and overcoming hardships....This was the first piece that spawned the idea for my original solo album that would later become Central Star." Powerful and dramatic, it could easily be viewed as the centerpiece of the album. "In a Trance" is another favorite and is much closer to jazz than classical with a slightly bluesy feeling. "Finding Home" begins as a dreamy waltz but alternates with a much livelier, flowing theme. I really like this one, too! The album closes with "Starlight,"an elegant expression of the peacefulness of a dark sky that sparkles with the light of millions of stars.

Central Star is a very impressive first album from Paula Dreyer and I can't wait to hear (and play!) more of her music. It is available from Amazon and Apple Music/iTunes as well as streaming sites like Spotify.

May 10, 2021
This review has been tagged as:
Debut Albums
Paula's Website Paula's Artist Page on MainlyPiano
Album Links
Amazon (referral)Apple/iTunesSpotify"Central Star" Sheet Music
This site contains affiliate links to products. We may receive a commission for purchases made through these links.