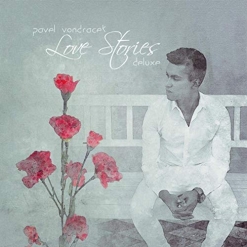 Pavel's Website Pavel's Artist Page on MainlyPiano
Album Links
Amazon (referral)iTunes
This site contains affiliate links to products. We may receive a commission for purchases made through these links.
Love Stories (Deluxe Edition)
Pavel Vondráček
2019 / Neor Records
65 minutes
Review by Kathy Parsons
Love Stories (Deluxe Edition) is the first album of original compositions by Pavel Vondráček, a young pianist/ composer/ keyboardist from The Czech Republic. (His first album, Lost In the Wind, is a collection of cover tunes and improvisations that was released in 2015.) Pavel started playing the piano when he was three and studied classical piano until the appeal of more contemporary genres of music captured his attention. A student at the Berklee College of Music in Boston, Pavel recorded the music for Love Stories in 2015, telling his personal story of a complicated love relationship (is there any other kind???). The first version of the album was solo piano, but the final version includes strings, organ, tubular bells, synthesizers and symphonic orchestra in addition to the piano. The music tells its love story from beginning to end, from the first romantic date to the funereal goodbyes, with many stories in between. It’s a very impressive album from an artist who was not yet 20 years old when he composed the music. The album itself consists of fifteen pieces and two bonus tracks.

Love Stories begins with the title track, a sweet and intimate expression of the feelings of a first date - “the red roses and candlelight.” Piano with light string washes get the album off to a lovely start. “A Waterfall of Broken Hearts” describes the first argument of the relationship and is darker and more intense. “My First Love” is played mostly at the upper end of the piano keyboard, giving it a feeling of lightness and innocence. The first version of “My Story” is a heartfelt piece for piano and strings. Played with deep sincerity and emotion, it’s the perfect music for a romantic movie! “Under a Cherry Tree” returns to feelings of warmth and tenderness. “Tears in the Rain” and “Nostalgia” are both poignant piano solos - simple but very touching. “By the Sea,” also a gentle piano solo, has a pattern of rolling broken chords on the left hand that suggests the peaceful ebb and flow of the tide. “Send Your Love Up On My Shore” is different from the other tracks in that it is a duet for piano and organ. Although the sadness is very palpable, the organ adds a particularly mournful quality to the piece. “The Prayer” takes that mournful feeling even deeper. Recorded on a cathedral organ, it is the “official” funeral of love - “the very last words and very last goodbyes.” The last two tracks are bonus tracks. The first is a more fully-orchestrated arrangement of “My Story.” The second is “Nocturne,” my favorite piece on the album. Very calm and peaceful, it is a gorgeous “night song” for solo piano that I suspect might be a newer composition. I really like this one!

Pavel Vondráček is off to a very promising start with Love Stories (Deluxe Edition)! It is available from Amazon, iTunes/Apple Music and CD Baby as well as many streaming sites.
December 23, 2019
This review has been tagged as:
Kathy's Picks
Pavel's Website Pavel's Artist Page on MainlyPiano
Album Links
Amazon (referral)iTunes
This site contains affiliate links to products. We may receive a commission for purchases made through these links.