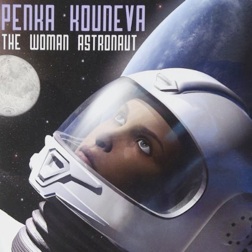 Penka's Website Penka's Artist Page on MainlyPiano
Album Links
Amazon (referral)iTunes
This site contains affiliate links to products. We may receive a commission for purchases made through these links.
The Woman Astronaut
Penka Kouneva
2015 / Varese Sarabande
45 minutes
Review by Kathy Parsons
The Woman Astronaut is a stunning concept album from composer and orchestrator Penka Kouneva. I first encountered Ms Kouneva in about 1998 when I was proof-reading the sheet music for the late Laurie Z’s Roots album, most of which Kouneva had transcribed. This was only a year or so after Kouneva became the first person to receive a Doctorate in Composition from Duke University. She was just breaking into composing for films and video games and has apparently never slowed down!

Born and raised in Bulgaria, Kouneva came to the US in 1990 with a Duke University composition fellowship and $130 in her pocket. She has received many awards including the Aaron Copland Award, a Sundance Composer Fellowship, Hollywood Music In Media Awards, The Visionary Award from Women’s International Film and TV Showcase, grand prize at the Tokyo Young Composers Competition, and numerous artist fellowships. She is on several advisory boards and is a frequent speaker at Game Developers Conferences, CalArts, Berklee, and many other schools and events. She is also a passionate advocate for artists’ growth as well as the advancement of women composers and gender parity.

The idea for The Woman Astronaut was inspired in part by learning that there are more women astronauts than there are women composers working on studio films (wow!!!). It is also a very personal autobiographical journey about an ambitious, self-determined woman who chooses a very unusual profession. In addition, Kouneva wanted to prove that she could score a movie blockbuster (this album should remove any doubt!!!). The music was recorded with a large Hollywood orchestra and featured soloists, and the music focuses on themes of perseverance, love, hope, and destiny.

The first of the fourteen tracks on The Woman Astronaut is “Earth,” which features violinist Lili Haydn. In the opening moments, there is a dark, droning sound behind the violin that gradually lightens as a sense of adventure builds and more instruments are added. “Starry Way” is darkly mysterious with a sense of urgency. “The Forest” is a bit more exotic and magical, and features Sara Andon on flutes. “Land of Burning Fields” ups the energy of the music with nail-biting intensity. “Looking Up” features Katia Popov on violin and describes what I interpret to be the power of a dream. “Training” expresses hard work, sacrifice and moving forward - very symphonic and stirring! Any success has its painful moments, and Mike Lang’s poignant piano expresses this vividly on “Broken.” “Taking Flight” continues the same musical theme but turns it into triumph. “Alarm and Rescue” cranks up the intensity to a dark and powerful level. A bit more ambient, “In Space” has a woman’s voice humming over a mostly electronic background. “Insomnia” is dark, tortured and very atmospheric. “Siren” effectively mixes orchestral, vocal and electronic instrumentation - very intense! The mournful and tragic “Goodbyes in Zero Gravity” goes right to the heart. “Solar Flare” brings the album to a powerful and dramatic close, leaving the listener breathless.

The Woman Astronaut is an amazing album on so many levels and I’m sure it will be one of my Favorite Albums for the year. Penka Kouneva is an incredible composer who can effectively express any emotion or situation with as much power or delicacy as is required. The album is available from PenkaKouneva.com, Amazon, iTunes, and CD Baby. I give it my highest recommendation.
March 14, 2016
This review has been tagged as:
Kathy's Favorites: 2016Kathy's Picks
Penka's Website Penka's Artist Page on MainlyPiano
Album Links
Amazon (referral)iTunes
This site contains affiliate links to products. We may receive a commission for purchases made through these links.
More reviews of Penka Kouneva albums 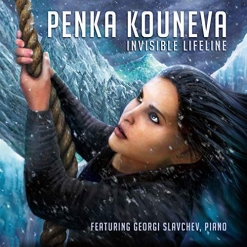