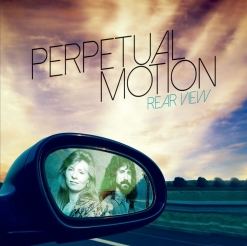 Perpetual Motion's Website Perpetual Motion's Artist Page on MainlyPiano
Album Links
Amazon (referral)iTunes
This site contains affiliate links to products. We may receive a commission for purchases made through these links.
Rear View
Perpetual Motion
2017 / CD Baby
63 minutes
Review by Kathy Parsons
Rear View is a 25-year retrospective of the music of Perpetual Motion. The founding and core members of the group are violinist Josie Quick and guitarist Tom Carleno, two extraordinary musicians from Colorado who met while teaching at a music store as college students. They have released five albums, and the thirteen tracks on Rear View were chosen from four of those albums. Quick and Carleno call their music “acoustic world fusion,” a vibrant mix of Central and South American folk, progressive jazz, and blues that makes their sound truly unique. To call the music on this album eclectic would be a huge understatement, yet the album plays wonderfully well as a cohesive unit. Sometimes buoyant and carefree and sometimes deeply poignant, the album gives those of us who missed this music the first time around a chance to catch up. Tom Carleno released Perfect Imperfection, his first solo guitar album in 2013 and it won the “Best Instrumental Album - Acoustic” at the 2013 Zone Music Reporter Awards (Josie Quick produced that album).

Rear View begins with the gently laid-back “Nova” from Perpetual Motion’s 2000 album Christmas Time Is Here. Michael Olson appears on bass and Rob Chamberlin on drums in addition to Quick on violin and Carleno on guitar. “Race of the Dolphin” comes from their 1993 debut, Ready, Willing, and Able. The violin/guitar duet hints of music from the Renaissance yet stays contemporary. “Oasis” features Quick on mandolin along with Carleno on guitar with subtle bass and percussion provided by Matt Deason and Chad Johnson. “Jungle Spirits” takes on an exotic Latin flavor that is upbeat yet sultry. “Northern Lights” is a favorite and is just Quick and Carleno. Deeply emotional and haunting, this one grabs me every time I hear it. I also really like “Blind Man’s Bossa,” a rhythmic smooth jazz piece with violin, guitars, bass, drums and percussion. Paul Musso soars heavenward on lead guitar. “Dreamcatcher” is a quiet beauty that sparkles with the sound of wind chimes as it sways with a graceful ease. “Jakeob’s Pond” has a light, carefree spirit and an infectious sense of fun. “Harvest Moon” is my favorite track on the album. Violin, guitar, and a little bass create a sound that is reflective, peaceful and very poignant. “Something Else,” a light and happy piece from the debut album, closes the album with a smile.

Rear View is a wonderful aural tour through twenty-five years of music created by Perpetual Motion. Always masterful yet smooth and relaxed, the joy of making music is the one constant element in their sound. The album is available from www.perpetual-motion.net, Amazon, iTunes and CD Baby. Here’s to the next twenty-five years of really great music!
January 31, 2017
This review has been tagged as:
Kathy's Picks
Contributing artists:
Josie QuickTom Carleno
Perpetual Motion's Website Perpetual Motion's Artist Page on MainlyPiano
Album Links
Amazon (referral)iTunes
This site contains affiliate links to products. We may receive a commission for purchases made through these links.
More reviews of Perpetual Motion albums 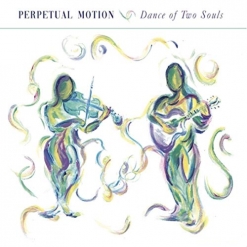