Peter's Website Peter's Artist Page on MainlyPiano
Album Links
Amazon (referral)iTunes
This site contains affiliate links to products. We may receive a commission for purchases made through these links.
Coming Home
Peter Jennison
2014 / Peter Jennison
45 minutes
Review by Michael Debbage
Peter Jennison’s impressive debut Longing For Home was released back in 2010 and was written during his second deployment as a Medevac pilot which paid tribute to the soldiers and families that sacrifice their relationships for the sake of our homeland’s security and well being. Coming Home is essentially an additional installment of similar themes but this time around focuses on the imagery of homecomings keeping in mind that they do not all have happy endings but nevertheless highly emotional ones.

Once again the talents of producer Will Ackerman and his A Team musicians merge effortlessly with Jennison’s compositions and unassuming piano work. Though the piano is complimented with the likes of Charlie Bisharat on violin, Jeff Oster on flugelhorn, Jeff Hayes on percussion and even Ackerman on acoustic guitar on a few occasions, the emphasis is on Jill Haley’s English horn and Eugene Friesen’s cello. The combinations are dramatic that create some very heavy pieces that include “Remember Me” that opens the album and “Taps (Written In Stone)” that pays tribute to the soldiers that lost their lives. Fortunately this is counter balanced with the deep elegant melodies of “The Journey To You” and “The Moment” that reflect more on the anticipation and actual joyous reunions of a returning soldier with his family and loved ones. Even more uplifting is the concluding upbeat “Coming Home” that also features the vocal harmonies of Rory Sullivan and Noah Wilding.

Coming Home has nothing to do with appealing to a pro war or anti war statement. This is actually Peter Jennison once again creating a wonderful musical poetic tribute not only to our soldiers that place their lives on the line for our country, but also the sacrifice that their families endure during their stay of duty. With such a powerful musical message and performance even if the tribute itself does not directly affect you musically it will.
March 28, 2015
This review has been tagged as:
Michael's Favorites: 2014
Peter's Website Peter's Artist Page on MainlyPiano
Album Links
Amazon (referral)iTunes
This site contains affiliate links to products. We may receive a commission for purchases made through these links.
More reviews of Peter Jennison albums 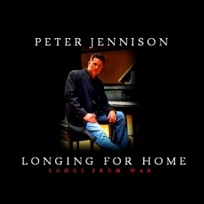