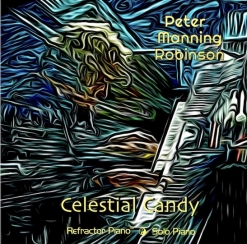 Peter's Website Peter's Artist Page on MainlyPiano
Album Links
Amazon (referral)Apple/iTunesSpotifyAn Hour On Earth video
This site contains affiliate links to products. We may receive a commission for purchases made through these links.
Celestial Candy
Peter Manning Robinson
2022 / Owl Walk Records
51 minutes
Review by Kathy Parsons
For anyone out there who is thinking "I'd like to listen to some piano music that is really different," I have a great one for you! Celestial Candy follows Peter Manning Robinson's 2020 release, Double Helix, and is just as mind-bending as that album. Robinson is the inventor and developer of The Refractor Piano™ (I'll explain in a moment), and this album contains seven Refractor Piano™ pieces and three that are solo piano - all original compositions.

Okay, let's start with a description of what the Refractor Piano™ piano is and is not. It is an acoustic grand piano (usually a Steinway) fitted with transducers and microphones. Its live sound is “refracted” through a unique proprietary system of hardware and software created by Robinson and co-developed with producer/ filmmaker/ guitarist Klaus Hoch. Quoting Robinson:

"As much as possible, I am creating this music live with no overdubbing or pre-recorded tracks and I never use synths or virtual instruments.  Everything that you hear is simply a ''Refracted acoustic piano. In this album, I am also using my own voice: singing, rapping, and making vocal gestures as I process it through the Refractor Piano™ live. It is so exciting to me to work in an idiom that does not exist except in this world: I am simultaneously a pianist, composer, inventor, programmer, conductor, and engineer. I love the images that this music evokes as I combine my acoustic piano with the varied textures that cascade from my invention. Above all, it must be emotional!”

Robinson's lifelong music career has been varied, to say the least. He started playing the piano at three and was playing with bands by the time he was twelve. His formal music training was at USC and Berklee College of Music. He has performed and recorded with a variety of jazz artists and his film and television scores have won many awards including an Emmy.

Celestial Candy begins with "An Hour On Earth," a piece with a very imaginative video by musical partner Klaus Hoch. It sounds like a whole band is playing this lively introductory piece, but it's just Robinson and his Refractor Piano™ having fun making music! Playful and very rhythmic, it sets the avant garde tone of the album. "Insomnia" is also played on Refractor Piano™ with experimental, other-worldly sounds and a driving beat. I'm really glad my occasional sleepless nights aren't quite this frantic! "Anjo Dancando" is the first of the solo piano pieces, and is very different from the Refractor Piano™ pieces with its strong classical and jazz roots. Robinson is obviously a very accomplished and articulate pianist with and without all of the bells and whistles! Robinson's voice becomes one of the instruments on "Mellifluous." I can't understand what he's saying/singing, but I don't think he intended us to. Dark, mysterious, and often a bit chaotic, it's a fascinating piece that pairs well with "Vanishing," the solo piano waltz that follows it. "Obelisk" swings into an entirely different direction with a Refractor Piano™ rap song with a driving beat and layered rap vocals. If you can still for this one, you'd better check your pulse! "Celestial Beach" is much more dreamy and atmospheric - kind of like a soundtrack for floating through space, enjoying the ride immensely. It's especially hard to believe that "Spiritual Warrior" was created with a piano only. A huge variety of percussive sounds propel the piano in ways I've never heard before - musical magic in more ways than one! And what a way to end the album!

As I said, this album is REALLY different, but what an amazing ride! You won't get drowsy listening to Celestial Candy! The album is available from Amazon, Apple Music/iTunes, and streaming sites such as Spotify.

May 5, 2022
This review has been tagged as:
Latest Reviews
Peter's Website Peter's Artist Page on MainlyPiano
Album Links
Amazon (referral)Apple/iTunesSpotifyAn Hour On Earth video
This site contains affiliate links to products. We may receive a commission for purchases made through these links.
More reviews of Peter Manning Robinson albums 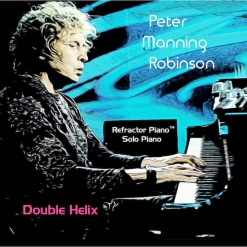