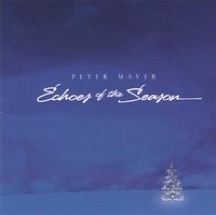 Peter's Website Peter's Artist Page on MainlyPiano
Album Links
Amazon (referral)
This site contains affiliate links to products. We may receive a commission for purchases made through these links.
Echoes of the Season
Peter Mayer
2005 / Little Flock Music
52 minutes
Review by Michael Debbage
Released over 5 years ago singer Jimmy Buffet’s guitarist Peter Mayer released his own twist of Christmas merry that also included three original seasonal compositions sitting well with the winter theme. An artist more than capable of peppering his singer songwriting style with a strong yet not dominant jazz feel to it, Mayer continues to make accessible yet adventurous music. This Christmas recording remains firmly in place with Mayer’s explorative tradition.

Echoes of the Season is not Mayer’s first festive recording. Back in 2000 he recorded Stars And Promises where original composition sat alongside unique jazzy arrangements of traditional Christmas carols. Likewise with Echoes of the Season that also blends instrumental arrangements with vocal renditions. In fact the vocal spotlight is exquisite on the bare self composed “The Light of Christmas Day” with Mayer’s ultra smooth vocal rendition accompanied by the Brentwood United Methodist Church Cancel Choir. This is pure magic! Similar results can be found on “Echoes Of Christmas” this time focusing on the flutes of Mark Holland. Meanwhile, Mayer puts himself center stage with the impressive guitar fret work on the toe tapping “Northwind Dancing” also driven by brother Jim Mayer’s acoustic bass framework.

The remainder of the album focuses on some of the seasons very popular carols such as “Deck The Halls”, “Go Tell It On The Mountain” and “We Three Kings Of Orient Are”. But Mayer also does well to arrange the more obscure hymn “Of The Father’s Love Begotten” that also includes some wonderful exotic string arrangements and a tabla percussive performance from Jon Nellen.

For those of you not familiar with Peter Mayer, as previously mentioned his full time gig is the guitarist for Jimmy Buffett. However, this has not stopped Mayer from finding the time to release his own solo material which began back in 1987.While he continues to unfortunately fly under the general listening public’s radar ears this does not change the fact that Peter continues to create wonderful recordings. Echoes of the Season embraces that tradition only adding to his portfolio of stellar recordings.

November 23, 2010
This review has been tagged as:
Guitar musicHoliday Albums
Peter's Website Peter's Artist Page on MainlyPiano
Album Links
Amazon (referral)
This site contains affiliate links to products. We may receive a commission for purchases made through these links.