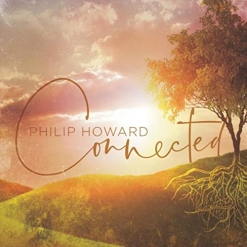 Philip's Website Philip's Artist Page on MainlyPiano
Album Links
Amazon (referral)iTunes
This site contains affiliate links to products. We may receive a commission for purchases made through these links.
Connected
Philip Howard
2018 / The Right Music
36 minutes
Review by Kathy Parsons
Connected is the debut solo piano recording by Philip Howard, a pianist/composer who was born and raised in Switzerland and came to the US in 1993 to attend the Berklee College of Music in Boston, MA. While at Berklee, Howard earned a degree in Film Scoring. Influenced by film music and composers such as Ennio Morricone, David Foster and Dave Grusin, Howard’s music is colorful, visual and often tells a story. Nine of the eleven tracks are original compositions and two are covers.

The title of the album was inspired by a lone tree at the top of a hill at sunset and the realization that the tree was struggling with the intense Southern CA heat and a lack of water, as was everything else in its surroundings. At the same time, the tree was providing much-needed shade for other creatures. Indeed, we all face struggles in life that can be desperate at times, and yet there is always something we can do to ease someone else’s burden - even just a little bit. This album is a lovely and timely reminder of how “connected” we all truly are.

Connected begins with “I Will Follow,” a piece inspired by a conversation about surrender, which comes in many forms. Strong and confident yet tender and open, it’s a great start! “Leave Yesterday Behind” is about letting go, starting over and getting a second chance in life or a relationship. Music is often built on repeated patterns and passages, but this piece never repeats anything in quite the same way, which seems reflective of life itself. Slow, graceful and poignantly introspective, “Fall” is like a musical painting of shadows getting longer and a chill in the air as winter approaches - a favorite! “I’d Just Like To Say…” expresses a passion for life and the beauty all around us - also a favorite. “Once Upon a Time in the West” is the theme to a 1968 movie by the same name. Composed by Ennio Morricone, this gorgeous piece represents quiet strength, resilience and hope. I really like Howard’s comment: “Clearly, someone was in love when they wrote this.” That pretty much says it all! “The Calling” questions how and when we will know what our true purpose in life is. A mix of emotions is expressed within the music and then it just kind of trails off. “Say Something” is the second cover arrangement and very effectively expresses the emotional conflicts as well as the pain of trying to communicate with someone who has closed himself or herself off - very powerful and heartfelt! “Chip in the Sugar” was originally written as an introductory piece for a friend’s performance of a dramatic monologue by Alan Bennett with the same title. Conveying the loss of unrealized dreams and loneliness, it’s a bittersweet close to a very impressive first album!

Connected is available from www.PhilipHoward.com, Amazon, iTunes and CD Baby.

November 8, 2018
This review has been tagged as:
Debut AlbumsKathy's Favorites: 2018Kathy's Picks
Philip's Website Philip's Artist Page on MainlyPiano
Album Links
Amazon (referral)iTunes
This site contains affiliate links to products. We may receive a commission for purchases made through these links.