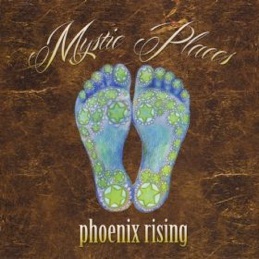 Phoenix Rising's Website Phoenix Rising's Artist Page on MainlyPiano
Album Links
Amazon (referral)iTunes
This site contains affiliate links to products. We may receive a commission for purchases made through these links.
Mystic Places
Phoenix Rising
2014 / Wendy Loomis
62 minutes
Review by Kathy Parsons
Mystic Places is the third album by Bay Area duo Phoenix Rising which features pianist/composer Wendy Loomis and flautist/arranger Monica Williams (traditional and world flutes). Nature sounds are interwoven in some of the music, setting a mood as well as a sense of place. The goal of this album is to “enable the listener to journey to exotic places on the earth and inside one’s soul.” Combining new age, world, classical and jazz styles into their music Phoenix Rising has been nominated for numerous awards by the Hollywood Music and Media Awards, Los Angeles Music Awards, and the Unisong International Competition. Several tracks from their two previous albums have been included in independent films. The variety of ethnic styles and musical genres is impressive and allows Phoenix Rising to perform in venues from street festivals to concert halls, art galleries, and clubs. In addition to piano and flute, synthesizers and a broad range of percussion instruments from all over the world add color, spirit, and exotic rhythms to their music.

The first Mystic Place on our journey is “Atlantis.” The sounds of birds and flowing water add to the mysterious atmosphere of the music. “Guanacos” refers to llama-like animals from South America with large, gazing eyes, and this tribute to them is a favorite. Lively and rhythmic, the piece overflows with an infectious and exotic spirit. “Eastern Breeze” takes us to the central square of a small village in eastern Europe. Flutes and percussion conjure images of a languid pace as warm winds fill the air. “Piseco” (meaning “fish”) brings us to upstate New York where the Algonquin and Iroquois tribes co-existed peacefully. Comprised of several movements, Native flutes and piano create a scenes of harmony, drama and mystery. 11-year-old Taylor Alyssa Lai adds her Native American flute to this piece - impressive! “Egyptian Fantasy” is another favorite. Inspired by mysteries, secrets, and primeval mounds designed to preserve the soul, the music swirls and dances with abandon. “Stone Cottage” takes us to a simpler time and lifestyle, conveying a peaceful contentment - I really like this one, too! “Winds of the Desert” moves to a more ambient style with a slow, minimalist flute, gentle percussion, and light synth and piano. The haunting “Humanity” reflects on the human heart’s capacity for both cruelty and compassion - another favorite. The dark and turbulent “Inside Out” explores the nature of hurricanes and earthquakes. Driving drums, keyboard and flutes express the chaos of any disaster. “Eternal Flames” brings Loomis’ graceful piano to the forefront while Williams’ lyrical flute weaves around the melody - a beautiful homage to the never-ending energies of remembrance. “Green Eyes” closes the album with a gorgeous hymn to unconditional love. There are flute touches here and there, but this is mostly a piano piece that trails off into the sounds of the surf at the end.

Mystic Places is an exciting musical adventure from the first note to the last! It is available from phoenixrisingmusic.net, Amazon, iTunes, and CD Baby. Recommended!
February 3, 2014
Phoenix Rising's Website Phoenix Rising's Artist Page on MainlyPiano
Album Links
Amazon (referral)iTunes
This site contains affiliate links to products. We may receive a commission for purchases made through these links.