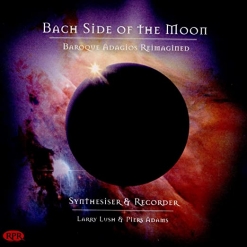 Piers' Website Piers' Artist Page on MainlyPiano Larry's Artist Page on MainlyPiano
Album Links
Amazon (referral)iTunesSpotify
This site contains affiliate links to products. We may receive a commission for purchases made through these links.
Bach Side of the Moon
Piers Adams and Larry Lush
2019 / Red Priest Records
57 minutes
Review by Kathy Parsons
Back in the late 1960’s, Wendy (born Walter) Carlos shocked and revolutionized the music world with performances of the music of JS Bach and other classical composers on this new-fangled instrument called a Moog synthesizer. All of a sudden classical music was cool and Switched-on Bach shot to the top of the charts, as did several of Carlos’ follow-up albums and movie soundtracks. Fast-forward to 2015-2018, when recorder virtuoso Piers Adams teamed up with synth master Larry Lush to create a collection of “re-imagined” adagios from Baroque composers that include Johann Sebastian Bach (3 pieces), George Frideric Handel (2), Antonio Vivaldi (3), and Henry Purcell (1). (An “adagio” is often a slow movement of a sonata or concerto.) The other composers who are included are Tomaso Albinoni (2), Giovanni Battista Sammartini (1), and Christoph Willibald Gluck (1).

The album arose from the belief that in the more down-tempo music of the Baroque period (about 1600-1750) “there are pieces of such timeless perfection that they deserve to be lifted across the centuries and placed in a contemporary context.” (quoted from the liner notes of the CD) The thirteen pieces come from the repertoire for the recorder, flute, oboe and voice. Adams says the album “takes the music of the best 18th Century composers, frees it from the court, cloister and cathedral of its time and gives it a surprisingly natural new home in the 21st Century chill-out lounge.” He continues: “I wanted to combine music from that era with new age music of today to create something spiritually powerful, uplifting and healing. The recorder is so often treated these days as a naive instrument - an image not helped by its association with the elementary school classroom - but in its heyday was regarded as a profound tool of expression, capable of imitating all the nuances of the human voice.”

Although perhaps not as revolutionary as the Switched-on Bach series, Bach Side of the Moon is a wonderful update for some extraordinary music that could have easily fallen into total obscurity. While being very respectful of the original music, Adams and Lush have made it more “user-friendly” for listeners who may not know the difference between Baroque and barbecue (don’t laugh - you’d be amazed at how many of my piano students have asked me about barbecue music!). Many classical listeners don’t want the music changed in any way, sometimes going as far as insisting that it be played only on instruments of the period when the music was created, but I can’t imagine anyone being unable to hear the sublime beauty of this album! (Snobs will be missing a real treat for the ears as well as for the soul!)

Bach Side of the Moon is available from Amazon and iTunes as well as Spotify and many of the streaming sites. Very highly recommended!
April 1, 2020
This review has been tagged as:
ClassicalKathy's Picks
Piers' Website Piers' Artist Page on MainlyPiano Larry's Artist Page on MainlyPiano
Album Links
Amazon (referral)iTunesSpotify
This site contains affiliate links to products. We may receive a commission for purchases made through these links.