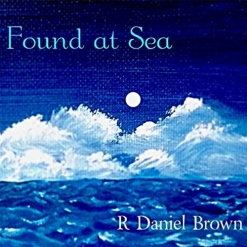 Daniel's Website Daniel's Artist Page on MainlyPiano
Album Links
Amazon (referral)iTunes
This site contains affiliate links to products. We may receive a commission for purchases made through these links.
Found At Sea
R Daniel Brown
2017 / R Daniel Brown
30 minutes
Review by Kathy Parsons
Found At Sea is the first serious solo piano music composed by R Daniel Brown in fifteen years. Over the past decade and a half, Brown has been working on rock and singer/songwriter music, most of which has not been released. More recently, he had been working on a rock album called Lost At Sea. As he was finishing the recording of the third track, his computer and recording equipment crashed and he lost most of his work. While an experience like that can be devastating, Brown saw it as a sign that it was time to return to solo piano. With injuries to his arms and a couple of fingers (not from playing the piano!), this was not an easy shift. Long story short, over time, the feeling returned to Brown’s fingers and arms and he felt ready to go in a different musical direction. While composing the music for the album, Brown made almost daily trips to the Gulf of Mexico (very close to his home) to look out on the water, and the eight tracks tell the story of “someone, or something, traveling out into the waters and finding their way back, changed and grown from the experience.” (quote from R Daniel Brown) Due to budget constraints, the sound quality of the album isn’t pristine, but it seems to fit well with the raw, visceral quality of some of the music. Sometimes very big and impassioned, the music also has quieter moments of reflection and peace. It’s interesting to note that Brown is also a visual artist and did the cover artwork as well as the music.

Found At Sea begins with “Waiting For the Tide,” which was inspired by a vision of the last turtle egg in a nest hatching and the baby turtle making its way to the sea. This piece is a soundtrack of sorts for that visualization. It begins with a pulsing beat that gradually speeds up while expressing a sense of wonder and adventure. The middle of the piece is joyous and exuberant, becoming calmer and then intensifying before a peaceful concluding movement. “Maiden Voyage” is a driving thrill ride with a very fast tempo and feelings of unbridled excitement. It has a very quiet ending section, but hold onto your hat for the rest of the piece! “Compass” is my favorite piece on the album. It begins with a series of rolling broken chords that could be describing the ripples on the water. As the piece evolves, those ripples become waves. The left hand plays a commanding and slightly bluesy rhythm in the deep bass of the piano and then the right hand almost steals the show with its own jazzy/bluesy response. As the title suggests, “The Day I Conquered the Storm” is dark, dramatic and very powerful. I love the last section of this one - a joyous and triumphant victory dance! “Drifting Hopeless, Drifting Hopeful” is much lighter and quieter, and actually feels like drifting on the water. The closing track, “The Moonlit High Tide,” is another favorite. Elegant, beautiful, and overflowing with emotion, the rolling left hand chords seem to take on the role of the water while the right hand melody is alternately graceful and rapidly sparkling, reflecting on the powerful beauty of the dark ocean and the dancing moonlight on the waves.

Found At Sea is an intense and dramatic solo piano journey that I have very much enjoyed. Hopefully it won’t take another technology disaster for R Daniel Brown to continue composing for piano! The album is available from Amazon, iTunes, and CD Baby. Check it out!
June 9, 2017
Daniel's Website Daniel's Artist Page on MainlyPiano
Album Links
Amazon (referral)iTunes
This site contains affiliate links to products. We may receive a commission for purchases made through these links.