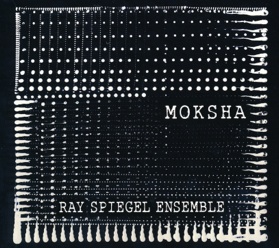 Ray's Website Ray's Artist Page on MainlyPiano
Album Links
Amazon (referral)iTunes
This site contains affiliate links to products. We may receive a commission for purchases made through these links.
Moksha
Ray Spiegel Ensemble
2014 / Simla House, Inc.
53 minutes
Review by Kathy Parsons
Moksha is a fascinating East meets West musical odyssey by the Ray Spiegel Ensemble. The eight tracks were recorded from 2001-2003 and are dedicated to the memory of Stephen James Stress, who passed away in 2005. Stephen James, who studied with Ravi Shankar, plays the Sarod (a 25-string Indian lute) on most of the tracks and co-composed four of them with Spiegel. Ray Spiegel is one of the few Americans who have learned the traditional style of tabla from master Ustad Alla Rakha. An extraordinarily versatile musician, Speigel is as comfortable playing tabla in a classical concert in India as he is playing vibes in a jazz club in New York or San Francisco. The album title is a term referring to liberation from the cycle of life, death, and reincarnation. One of the things that impresses me about this album is that most tracks sound like the musicians were having a great time playing together! Although the music is based on traditional Indian ragas, there are strong jazz influences in some of the music - even a vocalization resembling scat-singing on the title track! The Ensemble also includes Ramesh Misra on Sarangi (the bowed lute of India), Ira Coleman on bass, and Tani Tabbal on drum set; additional percussion is performed by Frank Velardi, Junior Gabo, and Robert Levin. Together, the Ensemble performs a wide range of stylings from hard driving dance beats to meditative, spiritually-oriented music.

The album begins with the title track, an 8 1/2-minute piece that is probably the best example of the merging of jazz and traditional Indian music. Rhythmic and often high-energy, there is no doubt that this album will be a unique listening experience! “Once Around” is a much shorter solo featuring Spiegel on tabla drums and manjira. “Tal Sawari” is a traditional piece arranged by Spiegel as a solo, this time on tabla drums and marimba - an energetic and very unusual combination! “Wolfy’s Dream” is another amazing merging of musical styles that this time includes some rock influence as well. “Connect the Dots” is my favorite track. All percussion, this one really rocks and makes it impossible to sit still! “Wild Mushrooms At Telluride” is a 14 1/2 minute tour de force that includes nature sounds and takes the listener on a wild “trip” that gets more frenetic as it evolves, calming slightly in the final few minutes. “Farewell” closes the set with a somber yet elegant and heartfelt piece composed by Barun Kumar Pal, who performs on Hansa Veena (Hindustani slide guitar). Stephen James plays violin and other instrumentation includes bass, tabla, percussion, harmonium, drums, and harp.

Moksha is a fascinating hour (almost) of jazz and raga fusion. Check it out at Amazon, iTunes, and CD Baby!
August 24, 2014
This review has been tagged as:
Jazz
Ray's Website Ray's Artist Page on MainlyPiano
Album Links
Amazon (referral)iTunes
This site contains affiliate links to products. We may receive a commission for purchases made through these links.