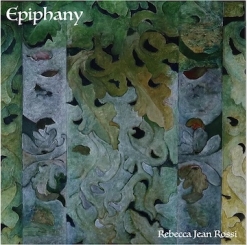 “Epiphany is about those moments where you suddenly feel some kind of insight or intuition, especially while writing music. For me, this sensation is connected to feeling like the music I’m writing comes from somewhere else, and that I am more like a conduit receiving musical information that is kind of just out there if you’re really listening for it."

Rebecca Jean Rossi studied at the Eastman School of Music and splits her time between New York and Milan. She has written and produced music in a variety of genres including electronic, pop, dance, and indie under her pseudonym, Krystalmath. She has also collaborated with a variety of artists and has toured Europe and the US supporting other indie groups as a pianist and vocalist. Her shift to composing cinematic piano music was inspired by revisiting some of her favorite pieces by Yann Tiersen which led to the discovery of the music of Nils Frahm, Agnes Obel, Hania Rani, and Max Richter.

Epiphany begins with the title track, a shimmering piece with ambient electronic enhancements in addition to the felted piano, giving it an ethereal, otherworldly effect - an intriguing start! "Tribeca" is somewhat mysterious and could be suggesting a search for something. The music isn't complicated, but is very expressive and evocative. "Retrospective" has a gentle flowing tempo and a dreamy quality that could represent the passage of time and the way the edges are softened and blurred in memories. "Everything You Left Behind" has softly rolling broken chords on the left hand that give the piece motion and momentum as the right hand plays repeated chords and intervals that give it a sense of urgency. I assume "Mussorgsky" refers to the Russian composer, Modest Mussorgsky (1839-1881). This piece is slow and rather dark, but very beautiful and brings the EP to an end much too soon.

Epiphany is a wonderful introduction to Rebecca Jean Rossi and I'm looking forward to exploring more of her music! The album is available from Blue Spiral Records, Amazon, Apple Music (singles), Spotify and other streaming sites.