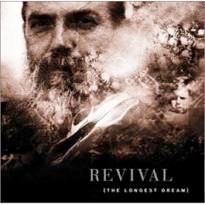 Revival's Artist Page on MainlyPiano
Album Links
Amazon (referral)
This site contains affiliate links to products. We may receive a commission for purchases made through these links.
The Longest Dream
Revival
2000 / Revival Productions
62 minutes
Review by Kathy Parsons
Several years in the making, Revival’s The Longest Dream is a stunning one-man tour de force. Sorin Pavelesco is Revival, and also acted as producer and engineer, as well as art director for the liner notes, cover art, and promotional package. It is mind-boggling that one person could put together such an impressive debut completely independently. We have one huge talent here, and I feel very fortunate to be involved in the beginning stages of what I hope will be a long and very impressive career.

A concept album, The Longest Dream consists of music on synth and piano as well as percussion, and spoken word. The music has classical, ambient, and world influences, but is uniquely its own. Some of the pieces are very melodic and flowing, and others are ambient with a fascinating array of sounds. I can think of no other recording to compare it to, and discovering such originality is inspiring. Mysterious, passionate, a little frightening at times, Revival has succeeded well in creating a dreamlike state that weaves in various emotions, moods, and colors, as dreams do. The opening and closing sequences give an interesting history of dreams from a religious, historical, and psychological standpoint. It is a very brief history, but the dreamy quality of the voice (sampled from the female voice on the Mac computer! I knew she sounded familiar!) and the blurring of some of the words add to the mysterious quality - like trying to grasp a part of a dream that keeps eluding you. Revival then altered his own voice for the spoken parts that describe the fragments of “the longest dream”. The words are truly part of the music, and are not in the least bit intrusive. It is an amazing experience to sit and fully concentrate on the music and all that went into this album. Revival also included a bonus track called “La Valse des Neiges”, which is completely different from the rest of the album. A fast waltz, it is much more upbeat and “fun” than “Longest Dream” itself, and gives additional insight into what Revival is capable of - a tantalizing teaser! Stunning and compelling from start to finish, The Longest Dream is one of the best albums I’ve ever heard, and will probably be my choice as “Album of the Year”. Bravo, Sorin!

Outside of Canada, The Longest Dream is available online at amazon.com.

November 11, 2000
This review has been tagged as:
Debut AlbumsKathy's Favorites: 2000
Revival's Artist Page on MainlyPiano
Album Links
Amazon (referral)
This site contains affiliate links to products. We may receive a commission for purchases made through these links.