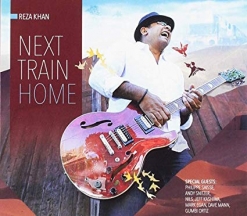 Reza's Website Reza's Artist Page on MainlyPiano
Album Links
Amazon (referral)iTunes
This site contains affiliate links to products. We may receive a commission for purchases made through these links.
Next Train Home
Reza Khan
2019 / Painted Media
63 minutes
Review by Michael Debbage
Born in Bangladesh and raised in the metropolitan of New York City not only effectively sums up Reza Khan’s cross-cultural influences and upbringing but essentially extends to his art as this jazz guitarist presents a unique accessible hybrid world jazz musical exploration. Able to execute and perform on both the electrical and acoustic guitar, Reza Khan has shown exponential growth as an artist resulting in the Next Train Home being his strongest recording to date.

Khan has been totally off this reviewer’s radar oblivious to the fact that this artist has been recording for over a decade when he released his independent self-produced and composed 2008 debut Painted Diaries. While it was an impressive debut, several of the 14 tracks also included the vocals of Brent Carter from Tower of Power. This was followed up 3 years later with the even more diverse Simple Plan that effective integrated his Bangladesh-NYC roots making for a most intriguing musical landscape best reflected on the track “Back To The East”. While Dreamwalker was a more experiment album, Khan came back very strong with his game changing melodic commercial effort Wind Dance. Featuring the likes of Acoustic Alchemy’s guitarist Miles Gilderdale, Pat Metheny Group’s bass player Mark Egan (also featured on his latest album), Mark Antoine on guitar and Nelson Rangell on flute, it was a whirlwind of a recording.

So, it has been 3 years since Wind Dance breezed through our ear canals but now what? Essentially, Reza has expanded his musical palate and returned with another top notch recording that not only retains that more commercial appeal. But rather than just repeat himself he found the ability to also include the experimental spirit of his earlier recordings resulting in a smorgasbord of the Reza World Jazz fusional freshness setting him apart from your typical Smooth Jazz outing.

Khan’s growing recording prowess this time around resulted in the continued appearance of Mark Egan with the addition of The Rippingtons’ saxophonist Jeff Kashiwa, Chuck Loeb’s former musical director Matt King and the ever-present keyboard player Philippe Saisse. Needless to say, Khan is once again in great company. Add his anchors in the form of drummer Graham Hawthorne and horn player Andy Snitzer who have been with him since his recording debut as part of the original Painted Diaries band, there is no doubt that that the performances were going to be top shelf material.

Despite the possible distractions of the above name-dropping, Khan’s latest and greatest Next Train Home is still all about his diverse musicianship and compositions. In fact, with the exception of the gorgeous opening commercial track “Drop Of Faith” where he is assisted by guitar producer Nil’s, the remaining portion of the album production is all Reza. The opening track is followed up with another very accessible toe tapping “Gathering” where the big three Khan, Kashiwa and Saisse are seamlessly integrated with their performances. Add the delightful optimistic warm musical breezes of “Clear Skies” as a listener you are now fully engaged realizing you are hearing a very special album evolve right before your ears.

Just when you think it is safe to engage in the commercial accessible waters, Khan throws you a curve ball with the progressive swing of “Club 368” followed by the adventurous toe tapping of “Plutonik”. Equal to the task is the slow builder “The Way” that will take you by surprise during its 5 minute plus musical ride. And almost intentionally Khan bookends the album somewhat the way he started with the more commercial leanings of collaborating with David Mann on “Under The Moon” and the glorious title track “Next Train Home” featuring Mark Egan. Needless to say, some of the effects and ideas on the latter will be compared with the sublime Pat Metheny hit “Last Train Home”, however, this is very clearly a wonderful Khan composition whose musical tempo comes to a tender slow stop bringing this album home to its final destination.

While 2016’s Wind Dance was without a doubt Reza Khan’s best recording at that time it would appear that despite the challenges of having to outdo himself, Next Train Home is a musical treat that clearly meets that challenge. With two exceptional recordings back to back there is very clear evidence that Reza Khan, slightly over a decade since his recording debut, has presented very strong arguments to consider him an establish major player in the world of jazz. Now it is time for you to assist making that a reality by taking the next train to the internet or your record store and bringing it home to discover the diverse musical world of jazz guitarist Reza Khan.

July 4, 2019
This review has been tagged as:
Guitar musicJazzMichael's Picks
Reza's Website Reza's Artist Page on MainlyPiano
Album Links
Amazon (referral)iTunes
This site contains affiliate links to products. We may receive a commission for purchases made through these links.
More reviews of Reza Khan albums 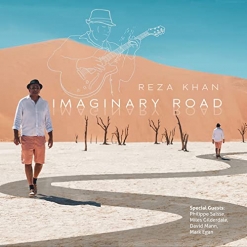