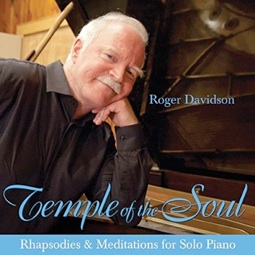 Roger's Website Roger's Artist Page on MainlyPiano
Album Links
Amazon (referral)iTunes
This site contains affiliate links to products. We may receive a commission for purchases made through these links.
Temple of the Soul
Roger Davidson
2014 / Soundbrush Records
78 minutes
Review by Kathy Parsons
Temple of the Soul: Rhapsodies and Meditations for Solo Piano is the genre-defying debut solo piano recording by Roger Davidson and his twentieth album to date. Initially a self-taught pianist/composer, Davidson has traveled the world learning as many styles of music as possible and studying with masters of the many genres and eras of music that interest him. Known mainly as a jazz and classical pianist, Davidson is also known for his chamber, symphonic, Latin, Brazilian, tango, Klezmer, choral and children’s music. It is no wonder then that Temple of the Soul has such an international flavor with so many influences coming into play - influences that have seamlessly become a part of Davidson’s musical soul. All twelve of the tracks on Temple of the Soul were improvised in the studio, flowing from his heart and spirit without technical restraint or stylistic boundaries. The album was recorded on an impeccably-restored 1876 Steinway grand and was produced by Pablo Aslan, Adam Abeshouse, and Davidson. Davidson is the founder of the Society for Universal Sacred Music as well as his recording label, Soundbrush Records.

Temple of the Soul begins with the title track, a piece Davidson says “felt like the beginning portal into the spiritual journey that this album is.” The piece has a Middle Eastern feeling in much of its 8 1/2 minutes, but there are also some very strong American influences. Sometimes big and exhilarating and sometimes quiet and reflective, this piece alone is quite a journey. “Ethereal Ocean” was named for its feeling of ebbing and flowing. Very free and in constant motion, it evolves and develops organically and in the moment. Nature has a strong influence on Davidson’s music, and “Forest Prayer” expresses his connection to “trees, birds, and everything in the forest” - a favorite. “Fountains of Life” reflects Davidson’s love of the French Impressionist composers in a piece that he refers to as a “celebration of life.” “From the Rising Sun” is based on the scale played on the Japanese Koto, a thirteen-string zither. Cinematic to meditative, it’s a beauty. “Blue Voyage” hints of Gershwin and the blues-infused popular music of that era. Peaceful yet edgy, I think this is my favorite on the album. “Freedom For All” comes in a close second with its references to African-American spirituals and gospel music - very earthy and soulful. The impassioned “Journey of Wisdom” suggests difficulties and hardships along the way to enlightenment - a struggle worth enduring. “Waves of Reflection” brings this evocative album to a thoughtful and peaceful close.

Temple of the Soul is an amazing musical journey. While it may be more of a listening challenge than much of the music I review, it is music that reveals new meanings and nuances the more you listen to it. Roger Davidson is an extraordinary pianist in so many ways! This album is available from Amazon, iTunes, and many other music retailers. Recommended!
July 28, 2014
Roger's Website Roger's Artist Page on MainlyPiano
Album Links
Amazon (referral)iTunes
This site contains affiliate links to products. We may receive a commission for purchases made through these links.
More reviews of Roger Davidson albums 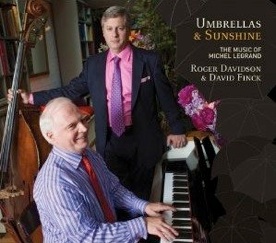 Umbrellas and Sunshine
with David Finck
2011