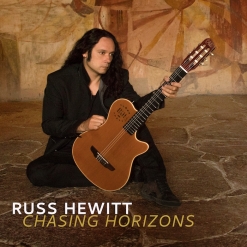 Russ' Website Russ' Artist Page on MainlyPiano
Album Links
Amazon (referral)Apple/iTunesSpotify
This site contains affiliate links to products. We may receive a commission for purchases made through these links.
Chasing Horizons
Russ Hewitt
2022 / Saulito Music
44 minutes
Review by Kathy Parsons
Chasing Horizons is the fourth album from Latin/World guitarist Russ Hewitt, an incredible artist that I have been reviewing since his 2008 debut, Bajo El Sol. It has been six years since Russ released Cielo Nocturno, but Chasing Horizons is well worth the wait! A Texas native, Russ has been playing the guitar since childhood and has a performance degree in classical guitar from University of North Texas. He has played in rock and heavy metal bands and is fluent in bluegrass, flamenco, and country genres as well. All of those influences are a part of his composing and playing styles, and he calls his music Latin/World because it welcomes a very broad spectrum of musical styles for him to draw from. All ten of the tracks on the album are Russ Hewitt originals, and he plays solo, rhythm and Tres guitars. A variety of guest artists and Russ' band bring their own magic to the music, which is soulful, rhythmic and uplifting. There are several music videos for pieces from the album that I highly recommend and a number of excellent singles were released prior to the full album.

Chasing Horizons begins with "Allende," a warm, dreamy piece with an infectious rhythm and a sunny demeanor - a great opener! Be sure to catch the video for this one! The title track features guitarist Nuno Bettencourt in a lively duet with Russ, backed by drums and percussion - it's not easy to sit still while listening to this one! "Vivir Libre" translates to "live free" or "be free" and the video for the piece was filmed at the ocean with gorgeous footage of the surf and flocks of sea gulls and sandpipers taking full advantage of their freedom - a wonderful match to the easy, swaying rhythms of the music! "Vivir Libre" is also a guitar duet, this time with Marty Friedman - dueling guitars at its best! "Amor Perdido" is my favorite track on the album and features the Bucharest All-Star Orchestra behind Russ' soulful guitar. The song is based on a Argentinian milonga pattern, which is essentially a slower version of a tango. The orchestra was recorded in Romania and the band was recorded in Texas, making it a global artistic collaboration! The results are gorgeous and very expressive. (There is a beautiful video of this piece, too!) "Sunset Samba" features Jorge Strunz and has the gentle sway of an evening breeze as the sun dips behind a hill or into the ocean. "Luna" is absolutely hypnotic with an easy-going rhythm behind Russ' magical guitar. "Cubalia Cafe" features Ardeshir Farah in a light-hearted, playful duet with Russ backed with upbeat drums and percussion. Love it! The closing track, "Return to Simitai," is unique! The piece features Tri Nguyen playing đàn tranh, a plucked Vietnamese zither that makes it another global artistic collaboration and an East-meets-West celebration! What a great album!

Chasing Horizons is available from Amazon and Apple Music/iTunes as well as streaming sites such as Spotify. Don't miss this one!
August 18, 2022
This review has been tagged as:
Guitar music
Russ' Website Russ' Artist Page on MainlyPiano
Album Links
Amazon (referral)Apple/iTunesSpotify
This site contains affiliate links to products. We may receive a commission for purchases made through these links.
More reviews of Russ Hewitt albums