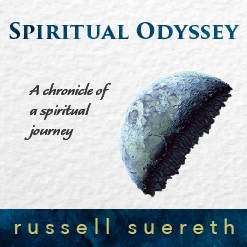 Russell's Website Russell's Artist Page on MainlyPiano
Album Links
Amazon (referral)iTunes
This site contains affiliate links to products. We may receive a commission for purchases made through these links.
Spiritual Odyssey
Russell Suereth
2017 / Haven Tone Records
40 minutes
Review by Kathy Parsons
Spiritual Odyssey is the fourth album from Russell Suereth and the first to feature his lyrics and singing as well as his electronic instrumentation. On a lifelong quest to promote a universal spirituality that will hopefully bring inspired people together to create a better world, Suereth uses music as one of his primary tools to reach people and elevate their sense of spirituality. Suereth is also the creator and host of the Spiritual Fizz Podcast and the publisher of Spiritual Fizz, an e-magazine that focuses on the connection of the spiritual and physical worlds.

Suereth composed, performed and produced the music on the album with some programming and production assistance from Miklos Malek, who also mixed and mastered the album. Additional production consultation and assistance were provided by Jeff Silverman, Aeone, and Byron Metcalf. Subtitled A chronicle of a spiritual journey, the instrumentation on Spiritual Odyssey is an interesting mix of sounds. Suereth explains: “I like my music to be made up of a variety of sounds, new and old. I like utilizing the sounds of classical instruments such as the oboe and cello and piano, and having them sound warm and natural, like old friends to our ears. But then I also enjoy adding more modern instruments or the sounds of more unusual world music instrumentation. Sometimes I heavily process the sound which gives a more modern feeling.” Although occasionally quite rhythmic, most of the music on this album would fall into the ambient category. The melodies are not complicated and are sung within a fairly small range that is almost conversational - all very pleasant and soothing.

Since the album takes the listener on a spiritual journey, I think it makes more sense to describe the journey rather than each track individually. Each of the ten songs on the album chronicles a step on the path of the journey. It begins with “Break the Chains,” a call to break free of the constraints and boundaries that keep you from a more spiritual existence. As you gradually transform, you travel to Virgo and other distant places to learn how the universe works. New perspectives allow you to see things more clearly. Even though you continue to encounter hurdles in life, accept them as they will help you grow. The closing song, “A Burning Rainbow” signifies that your spiritual essence now radiates depth and color.

With the stress and craziness of our modern world, any attempts to bring comfort and positive change should be embraced with open arms! May the messages in Spiritual Odyssey lead us in that direction! The album is available for download from Amazon, iTunes and CD Baby.
December 29, 2017
Russell's Website Russell's Artist Page on MainlyPiano
Album Links
Amazon (referral)iTunes
This site contains affiliate links to products. We may receive a commission for purchases made through these links.