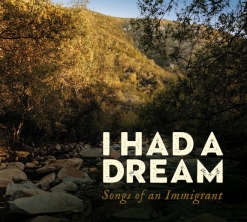 Ruth and Emilia's Website Ruth and Emilia's Artist Page on MainlyPiano
Album Links
Amazon (digital)Apple/iTunesSpotifyAmazon (CD)
This site contains affiliate links to products. We may receive a commission for purchases made through these links.
I Had a Dream - Songs of an Immigrant
Ruth and Emilia
2021 / Baa Baa Farms Music
28 minutes
Review by Kathy Parsons
I Had a Dream - Songs of an Immigrant is an album that truly defies categorization (always a plus, I think!). Created and performed by the mother/daughter duo, Ruth and Emilia (Ruth Hertz Weber and Emilia Lopez-Yañez), the project was born when Ruth set the poems of her late grandmother, Betty Karon Hertz, to music so that the story of her impoverished childhood in Russia, her daring escape during the Bolshevik Revolution, and her life as an immigrant in the US would be forever memorialized. Ruth and Emilia are both classically-trained musicians whose music has appeared on television, in films, with symphonies, and in choral music arrangements. They have released several Billboard-charting albums and have won numerous awards including the Grand Prize in the John Lennon Songwriting Competition (children's), Grand Prize in the Hollywood Music in Media Awards (children's) and many others. For this album, Ruth wrote and arranged the music, sings back-up vocals, and plays piano and keyboards; Emilia sings and plays oboe. Some of the ten tracks include other musicians and instruments such as guitar, flute, strings and percussion. The CD version of the album includes a booklet with "About Grandma's Story," photos, the poems/lyrics, and the translation of "Mayn Heym" which is sung in the original Yiddish.

I Had a Dream begins with "Mushrooms," a sweetly poignant song about when Betty was eight years old and gathered mushrooms in the woods to keep her family from starving. Obviously, the circumstances were very grim, but the song reflects the joyful innocence of a child on an adventure. The poem for the title track is very a short summary of some of the milestones in Betty's life and the music is haunting and slightly mysterious; John Mock's acoustic guitar adds to the folk elements of this beautiful song. "I Am a Tree" is a short poem that was created while hiding in the trenches as armies passed through the area during the war. In the poem, Betty imagines herself as a tree that grows fruit "on my beautiful branches"; Emilia's oboe is especially expressive on this one. "To Lauren" is a playful ode to a sweet granddaughter. "The Six-Day War" is much darker and refers to the 1967 war fought between Israel and the neighboring states of Egypt, Jordan and Syria. Once again, the oboe adds a very haunting quality. "Dear Ruth" was a loving poem written on a card for Ruth's college graduation. Cello, piano, flute and light orchestration send this tender song soaring straight to the heart. "Mayn Heym (My Home)" is sung in Yiddish and is a heartfelt anthem to Israel. "My Darling" was written after the death of Betty's husband of sixty years and is a deeply moving tribute to a beloved husband. Inspired by her grandmother's stories, Ruth wrote "Back In Your Younger Days" as a loving gift to Betty that must have touched her very deeply. The album closes with the question of "Why Am I Here?" - "To look around and disappear" - a thought-provoking conclusion to a truly exceptional album.

I Had a Dream - Songs of an Immigrant is an inspirational journey in song and is suitable for all ages. It is available from Amazon both as a CD and in digital formats to download and/or stream, as well as from Apple Music/iTunes, Spotify and other streaming sites. It's very beautifully done!
February 7, 2022
Ruth and Emilia's Website Ruth and Emilia's Artist Page on MainlyPiano
Album Links
Amazon (digital)Apple/iTunesSpotifyAmazon (CD)
This site contains affiliate links to products. We may receive a commission for purchases made through these links.