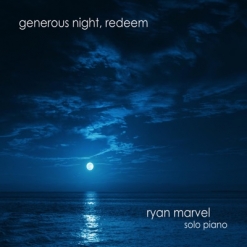 Ryan's Website Ryan's Artist Page on MainlyPiano
Album Links
Amazon (referral)Apple Music
This site contains affiliate links to products. We may receive a commission for purchases made through these links.
Generous Night, Redeem
Ryan Marvel
2019 / Ryan Marvel Music
50 minutes
Review by Kathy Parsons
With “Album of the Year” awards for his past two releases, can Ryan Marvel keep up that kind of quality and emotional intensity in his subsequent music? I can say with all honesty: “Yes he can!” Generous Night, Redeem is another solo piano masterpiece overflowing with soulful emotional expression where every note rings true. This new music is a collaboration between pianist/composer Ryan Marvel and his mother, published poet Betti Bernardi. The idea was inspired by chef Dominique Crenn, who presents the patrons at her San Francisco restaurant with a poem instead of a menu. Ryan’s proposal to his mother was to create an album of original music corresponding to an original poem. In the process, Betti wrote words to Ryan’s music and Ryan wrote music to her prose. Each part stands on its own as a complete work of art, as they do by combining them. The poem appears on the back cover of the CD with the phrases that became song titles highlighted. In the liner notes, Ryan sums up the project beautifully: “The music here reflects memory, truth, love, loss, transformation and letting go. It’s about walking through - not around.”

Ryan Marvel’s 2017 release, Reflecting Forward, earned Album of the Year awards from both Whisperings Solo Piano Radio and SoloPiano.com. Ryan opened his heart and soul in that music with honesty and a power that continues to be cathartic for him as it heals and strengthens those who hear it. His new music is equally emotional and deeply personal, yet it will communicate to anyone who takes the time to listen - heart to heart, spirit to spirit.

Generous Night, Redeem begins with “Lunar Melody,” a dark and mysterious piece that sets the tone of the album. “Whispered Words” has a steady flow that keeps its simple melody moving forward. As the title suggests, “Crying Heart At Sleepless Dawn” is sad and very poignant, reaching into your soul. The quietly introspective “Fleeting Passage” is calm but not quite peaceful. Intricate and rapidly-flowing, “Overwhelm” shows what an amazing pianist Ryan Marvel is. “The Face of Truth,” on the other hand, is very open and vulnerable with nothing to hide behind. The title track comes at about the mid-point of the album, and feels much like a heartfelt prayer. “Veiled in Tender Warmth” is the music of enduring love - peaceful, content and unbreakable. Very slow and still, yet expressive and profound. Although it is lighter, “Breath of the Vagabond” isn’t quite carefree. “Shifting Winds of Providence” returns to a more pensive feeling of reflection and gentle remembrance. “Sweet Memory, Deliver” is my favorite piece on the album. Very delicate and fragile, it feels much like watching the graceful movement of a butterfly. Gorgeous! “Glance the Stars” ends the album with a bit of musical magic that dances lightly with a quiet joy.

What a fantastic album! Generous Night, Redeem is available from RyanMarvel.com, Amazon, Apple Music, CD Baby and many streaming sites. It is definitely one of the best albums of the year! Don’t miss it!

August 27, 2019
This review has been tagged as:
Kathy's PicksWhisperings 2019 Album of the Year NomineesWhisperings Album of the Year
Ryan's Website Ryan's Artist Page on MainlyPiano
Album Links
Amazon (referral)Apple Music
This site contains affiliate links to products. We may receive a commission for purchases made through these links.
More reviews of Ryan Marvel albums 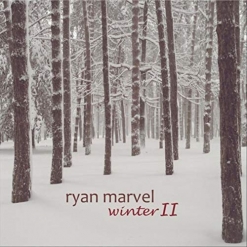 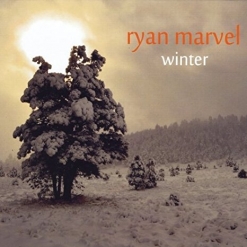 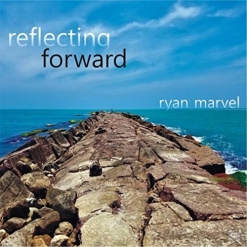