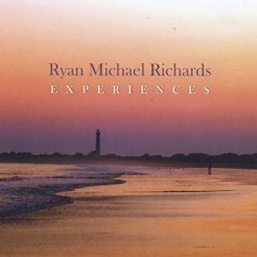 Ryan's Website Ryan's Artist Page on MainlyPiano
Album Links
Amazon (referral)iTunes
This site contains affiliate links to products. We may receive a commission for purchases made through these links.
Experiences
Ryan Michael Richards
2014 / Ryan Michael Richards
46 minutes
Review by Kathy Parsons
Experiences is the very impressive first full-length recording by guitarist Ryan Michael Richards. Produced by the legendary Will Ackerman (founder of Windham Hill Records and a world-class guitarist himself) at his Imaginary Road Studios, two of the eleven original pieces are solo acoustic guitar and the others feature an assortment of brilliant backing musicians such as Derrik Jordan, Tom Eaton (who co-produced), Jeff Oster, Ackerman, Premik, Noah Wilding, Eugene Friesen, and Jill Haley. Richards started playing the guitar at the age of fourteen and includes Alex DeGrassi, Will Ackerman, Nick Drake, Eddie Van Halen, Jaco Pastorius and Christian McBride in his list of influences. Richards’ music is smooth, heartfelt and often very romantic. To quote Ackerman, “Ryan Michael Richards is a guitarist whose heart is in every note. He seems incapable of anything that isn't true to him. This brilliant artistic honesty is the hallmark of what he has created in Experiences.” That artistic honesty will also communicate to a wide range of musical ears and hearts and will undoubtedly send this delightful music soaring up the music charts.

Experiences begins with “Her Garden,” a lively yet peaceful piece that features Richards on both acoustic guitar and electric bass, Derrik Jordan on electric violin, and Tom Eaton on keyboard. The optimism and joy expressed in the music brings images of warm sunshine and beautiful flowers nodding their heads to the rhythms of the breeze. “Heather Moon” is a peaceful favorite that is mostly solo acoustic guitar with subtle piano embellishments performed by Eaton. “Pathway To Love” was featured on the recent The Gathering II compilation of Ackerman-produced artists and is another beauty. It begins as a guitar solo and becomes a duet with Jeff Oster on flugel horn and muted trumpet. Ackerman steps front and center as lead acoustic guitarist on “Coastline,” which also features Premik on lyricon and Eaton on percussion. The gentle, peaceful quality of this piece will take the edge off of any day! “On the Way to the Shore” reflects the happy anticipation of visiting a favorite place and includes the haunting vocals of Noah Wilding and light percussion by Eaton. “Townbank Bay” is another favorite. Other than some backing vocals from Wilding, this one is all Richards playing from the depths of his soul. It begins with an almost percussive repeated guitar pattern and gradually becomes a gorgeous flowing melody with hypnotic vocals that send it soaring. “Victorian Love” is a tender and evocative duet for guitar and English horn (the wonderful Jill Haley) - an unusual pairing that works magically. As the title suggests, “Day of Play” is a light and carefree guitar solo that brings this excellent album to a close. I hope your “replay” button works well for this album!

Experiences is a truly exceptional debut with no weak tracks on the entire album. It is available from Amazon, iTunes, and CD Baby. Very highly recommended!
September 28, 2014
This review has been tagged as:
Debut AlbumsGuitar music
Ryan's Website Ryan's Artist Page on MainlyPiano
Album Links
Amazon (referral)iTunes
This site contains affiliate links to products. We may receive a commission for purchases made through these links.
More reviews of Ryan Michael Richards albums 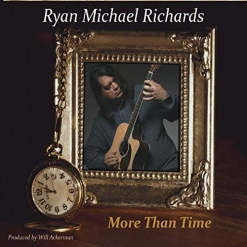