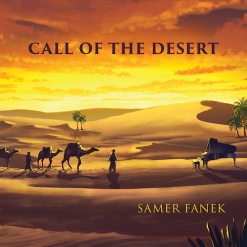 Samer's Website Samer's Artist Page on MainlyPiano
Album Links
AmazonApple/iTunesSpotify
This site contains affiliate links to products. We may receive a commission for purchases made through these links.
Call of the Desert
Samer Fanek
2022 / Samer Fanek Music
34 minutes
Review by Kathy Parsons
Call of the Desert is the fourth album (plus some singles) from multiple award-winning pianist/ keyboardist/ composer Samer Fanek and what a joy it is! The music was inspired by Samer's nostalgia for his home country of Jordan as well as a longing to travel back there more often. In his own words: "Call of the Desert is my way of giving something back since moving to the United States in 2008. While composing and producing it, I did some exploration of Middle Eastern ideas and instruments (such as Oud, Tabla, Riq, Ney, and Qanun). Given that I grew up listening to both Arabic and Western music back home, the opportunity to seriously merge both influences was long overdue and this is my attempt to do it for a whole album."

Like his previous recordings, the music for Call of the Desert was produced and recorded in Samer's home studio near San Francisco, but it's impossible to tell because the sound quality is flawless! Samer (pronounced SAM-er) has always cited Yanni as one of his biggest musical influences, and that influence is present in a very positive way. One of Samer's dreams is to perform his music worldwide with bands and orchestras, but he performed a solo piano house concert here in Oregon in 2017 and everyone who was lucky enough to be here loved it!

The album begins with "Call of the Desert, Part 1" and ends with "Part 2." The two pieces were created with the intention of both parts being performed back-to-back in concert with a band or orchestra. Piano, strings, flutes and a variety of Middle Eastern instruments combine to express Samer's longing for his homeland, drawing the listener in gently and very effectively. "Nighttime Celebrations" is much brighter and livelier with a strong, catchy rhythm that gets the toes tapping. "Where Did the Time Go" is a heartfelt reflection on the passage of time, touching the soul with its honesty and sincerity while expressing deep emotions that we can all relate to in our own way. "Into the Sun" has a big, cinematic sweep, inviting images of vast expanses of desert sand and a blazing sun expressed with Middle Eastern instruments as well as drums, strings and piano. Again quoting Samer: "For the song 'The Old Arabic Shop,' I personally think of images of walking down the lively streets of older areas around downtown Amman, Jordan. For a listener who has never visited these parts of the world, my goal is to evoke imagery of wandering around an old lively Arabic bazaar full of friendly locals." Samer succeeded well with his goals, as this lively, light-hearted piece seems to express a simpler, less-stressful life. "Dramatic Encounters" and "Mediterranean Moments" are bright, lively and high-spirited while "Pleading to You" is a slow, impassioned heartbreaker. "Desert Rush" is once again big, colorful and cinematic before concluding with the magical "Call of the Desert, Part II."

I fully expect Call of the Desert to climb the charts very quickly, so if Samer's music is new to you, this album is a great way to get acquainted with it! Samer's fans will be thrilled with his new music (I sure am!!!)! The album is available from Amazon, Apple Music/iTunes, and streaming sites including Spotify. Don't miss it!

April 18, 2022
Samer's Website Samer's Artist Page on MainlyPiano
Album Links
AmazonApple/iTunesSpotify
This site contains affiliate links to products. We may receive a commission for purchases made through these links.
More reviews of Samer Fanek albums 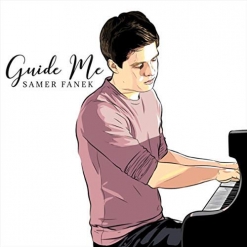 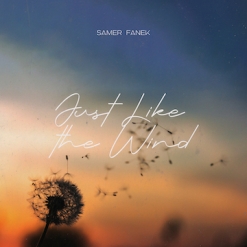 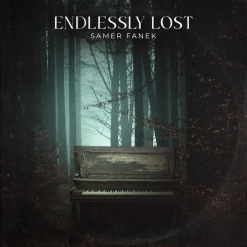