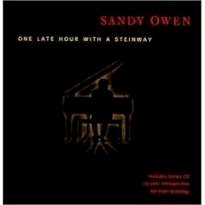 Sandy's Website Sandy's Artist Page on MainlyPiano
Album Links
Amazon (referral)iTunes
This site contains affiliate links to products. We may receive a commission for purchases made through these links.
One Late Hour With a Steinway
Sandy Owen
2001 / Paras Recordings
Disc 1: 51 minutes
Disc 2: 73 minutes
Review by Kathy Parsons
This double CD from pianist Sandy Owen is incredible! One Late Hour With a Steinway was recorded in a single, continuous take one night, and is unedited. Quiet, introspective, and exceptionally intimate, this album is a portrait of an artist in the midst of a particularly creative and inspired hour. There is a multitude of influences present in the music, but, for the sake of classification, I would call the first CD in the set smooth jazz. The gentle mood is consistent throughout the album, making it unobtrusive as a backdrop for other activities, but the music is just too good to not listen to it with full attention. Sandy Owen is one of a handful of artists who seems to know his instrument so well that it is an extension of himself and could even be his primary means of communication. The ten tracks on this CD are original compositions except “He Belongs”, which was composed by Owen’s brother’s high school music teacher, and “Danny Boy”, which Owen calls “simply one of the most emotional and best melodies ever”. All of the tracks are melodic and I love ‘em all, but I think my favorite is “Peacock’s Dance”, which began as an experiment in “subdividing the 5/4 time signature”. A bit “jazzier” than the other tracks, this one has an infectious, although easy-going, rhythm with a flowing melody over the top. I hear a little bit of Liz Story in there, too.

As impressed as I am with One Late Hour, the bonus CD, “Far From Yesterday”, really blows me out of the water! Since Sandy Owen’s name isn’t that well-known (I’d never heard of him before this), this retrospective was intended to introduce listeners to the earlier work of this remarkable composer/pianist. He recorded eleven albums before “Late Hour”, mostly as a solo artist, but two were with the trio Iliad (formed in high school with Owen’s brother, Ted on percussion and Larry Andrews on bass). Where “One Late Night” carries a consistent mood, “Far From Yesterday” demonstrates a very broad range of playing and composing styles. Every track on this CD is a favorite - it is truly THAT good! Many of the tracks have additional instrumentation, such as sax, cello, oboe, and horns (all real musicians rather than patches or synth tracks). I’d love to tell you about every track, but there isn’t space. A couple of pieces that I can’t get enough of are the spooky “Shadows”, the hauntingly beautiful “Heart Crossings I - Passage” and “Desert Journey”, and the full-tilt “Beanface Boogie”. The CDs come with an excellent booklet that includes Owen’s descriptions and inspirations for all of the pieces, his biography, and discography. This is an incredibly good collection, and I know it will be on my Top 10 for 2002 even though it was released in ‘01. One Late Hour With a Steinway is available from sandyowen.com, amazon.com, and cdnow.com. I give this CD my very highest recommendation!!!!! Bravo amundo!
November 1, 2001
This review has been tagged as:
Kathy's Favorites: 2002Kathy's Top 40 for the Decade (2000-2009)
Sandy's Website Sandy's Artist Page on MainlyPiano
Album Links
Amazon (referral)iTunes
This site contains affiliate links to products. We may receive a commission for purchases made through these links.
More reviews of Sandy Owen albums 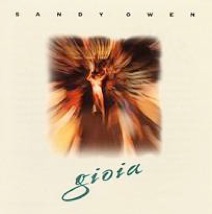 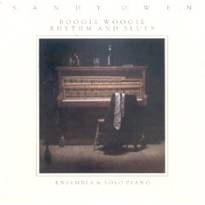