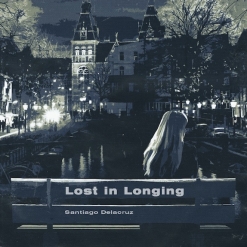 Santiago's Website Santiago's Artist Page on MainlyPiano
Album Links
Amazon (referral)Apple/iTunesSpotify
This site contains affiliate links to products. We may receive a commission for purchases made through these links.
Lost in Longing
Santiago Delacruz
2022 / Santiago Delacruz
42 minutes
Review by Kathy Parsons
Lost in Longing is the debut solo piano album from Colorado-based pianist/composer Santiago Delacruz, and what a lovely debut it is! If you've read many of my reviews, you know that I love music that defies categories and genres, and this album certainly does that. Three years in the making, the twelve original tracks express a range of emotions and experiences - sometimes within the same piece! Quoting Delacruz: "When I set out to write the pieces for this album, my intention was clear: make music that I love. There are elements of classical music, movie soundtracks, Broadway musicals, and even jazz and pop. In short, anything that inspired me along my rich musical journey so far...I believe that music is the language of emotion and, on this album, I’ve included songs that move me in different ways." Despite the mood and stylistic differences from piece to piece, the album flows smoothly and evenly, making it great background music as well as music for more focused listening. An accomplished pianist from childhood on, Delacruz plays with the confidence of someone who is the happiest and most comfortable with a piano keyboard at the ends of his fingers. I'm very impressed with Lost in Longing and am happy to learn that Delacruz is busy working on the music for his next album!

Lost in Longing begins with "Only Dreams Remain," which was also released as a single. At just under 1 1/2 minutes, it's a short piece that expresses deep emotion and serves as a powerful prelude to the rest of the album. The dream-like title track begins quietly with open space between many of the notes and a free-flowing feeling not unlike a daydream. As it progresses, the music builds to a lively and more passionate middle section, and then returns to a quieter, dreamier mood to the end. "Your Broken Heart Awakens" was also released as a single and expresses excitement and optimism that is infectious. "I Found You" is almost euphoric as it dances and twirls on a puffy white cloud. Lively and joyful, this one is a real day-brightener! "When Souls Dance" takes on a graceful classical feeling and makes me think of a romantic ballet for two - a favorite track! "And So We Begin" also has a classical elegance and could easily be the heartfelt theme to a romantic movie. "Racing Hearts" returns to an upbeat, exciting tempo that swirls with joy. "Now You Can Fly" feels very much like a free improvisation, and seems almost like an intimate conversation that is both warm and encouraging. "Some Tears Don't Dry" is also very intimate, but is more of a soliloquy - perhaps created at the piano late at night by candlelight. I really like this one, too! Saving the very best for last, the album closes with "Arising From Ashes," an almost six-minute beauty where passion and deep emotion flow from every note. I hope there will be sheet music for this one!

What a great album Lost in Longing is, and what a great beginning for this wonderful new artist! The full album and singles are available from Amazon and Apple Music/ iTunes, and can be streamed from Santiago Delacruz's website and other streaming sites such as Spotify. Both thumbs up!
July 13, 2022
This review has been tagged as:
Debut AlbumsLatest Reviews
Santiago's Website Santiago's Artist Page on MainlyPiano
Album Links
Amazon (referral)Apple/iTunesSpotify
This site contains affiliate links to products. We may receive a commission for purchases made through these links.