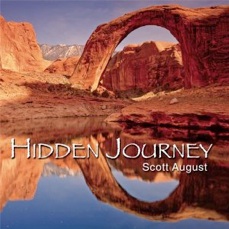 Scott's Website Scott's Artist Page on MainlyPiano
Album Links
Amazon (referral)
This site contains affiliate links to products. We may receive a commission for purchases made through these links.
Hidden Journey
Scott August
2012 / Cedar Mesa Music
65 minutes
Review by Kathy Parsons
Hidden Journey is the sixth release from composer and multi-instrumentalist Scott August, best-known for his Native American-style flute playing and his evocative soundscapes that combine World and Ambient musical styles. I have to admit that this is the first of August’s recordings that I have heard, but I really like what I’m hearing. In addition to a variety of flutes, August performs on tribal drums, Latin guitars, piano and an assortment of world instruments, making this a fascinating exploration on many levels. With the theme of “an exciting and invigorating adventure into the secluded backcountry of the American Southwest” (from the liner notes), the moods of the music vary from warm and sunny to rather desolate and lonely. I especially enjoy the tracks where August blurs genre lines, creating his own unique styles. His music is bold yet laid-back and often very visual, so it is no surprise that he has composed music and sound design for hundreds of films, commercials, and video projects for clients such as NASA, The Discovery Channel, Lexus, Chevrolet, HBO, Nabisco, and Minolta - a very eclectic group!!!

Hidden Journey begins with “Awakening,” a Native American flute solo with keyboard washes in the background for atmosphere and color. Very peaceful and serene, it’s a beautiful opening. “Sonoran Sojourn” is livelier and more buoyant with guitar, piano and light percussion in addition to the spritely flute. Easy-going and carefree, it conveys a sense of adventure and of moving forward - a favorite. “Summer Horizons” is a bit more orchestrated to describe the shimmer and lazy motion of the afternoon heat. “Turquoise Trail” is another favorite. Guitars, flute and hand percussion set a scene that could only be the American Southwest. About halfway into the piece, the flute switches to a more jazz style while the other instruments maintain the original rhythms. It’s a fascinating mix that works incredibly well - a great piece and a very catchy one! “Lord of the Night” refers to the Mayan tradition that each night is ruled by one of the nine Lords of the Night. Dark, mysterious, and just a little bit eerie, flute, keyboard effects, and exotic hand percussion paint a vivid picture. I absolutely love “Red Rock Crossing,” which again blends genres very effectively. The flute is lively and joyful while acoustic guitar, bass, and percussion create a spirited backup. Upbeat and jazzy, this track has been replayed many, many times - especially in the car while driving through a forested area on the Oregon Coast. “Hidden Moments” and “Searching For the Ancients” are much more ambient and atmospheric - and very beautiful. “Quiet Journey” is a flute solo that was recorded live. I’m not sure if reverb was used or if it is the natural sound of echoes. Either way, it’s haunting and very effective. “(Going) Home” is a duet for flute and crickets! Bittersweet and nostalgic, as the end of most great adventures are, it’s the perfect close to an exceptional album.

Hidden Journey is available from [www.cedarmesamusic.com] and Amazon. Check it out!
February 6, 2013
This review has been tagged as:
ZMR Winner
Scott's Website Scott's Artist Page on MainlyPiano
Album Links
Amazon (referral)
This site contains affiliate links to products. We may receive a commission for purchases made through these links.
More reviews of Scott August albums 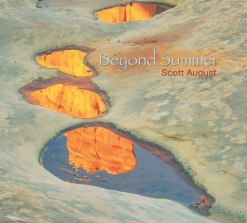