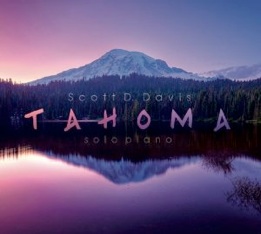 Scott's Website Scott's Artist Page on MainlyPiano
Album Links
Amazon (referral)iTunesSongbook Review
This site contains affiliate links to products. We may receive a commission for purchases made through these links.
Tahoma: Reimagined
Scott D. Davis
2013 / Scovis Music Productions
66 minutes
Review by Kathy Parsons
Tahoma: Reimagined is the 10th anniversary re-release of Scott D. Davis’ first solo piano album, Tahoma. The complete album was re-recorded late at night on Scott’s Yamaha C7 grand piano in his home in San Diego. Some of the pieces appear in a different playing order, but all fourteen are there plus a bonus track, “Stillwater.” As would be expected, the songs have evolved a bit over the past decade, and most are actually a little longer than they were on the first album. The piano sound is far superior this time, with re-mastering done by Joe Bongiorno at his Piano Haven Studio. Since the release of the first album, Davis has been more willing to let his rock roots show, culminating in the release of two albums of rock covers, Rockfluence (2005) and Pianotarium (2007), Davis’ solo piano tribute to Metallica. Davis is set to release a new solo piano album called The Beautiful Darkness sometime this fall - an event I’m looking forward to! Davis is one of the most dynamic performing pianists around, and this album is a great combination of his smoother “new age” style music and his harder-edged “big pieces.”

The album begins with “Positive Altitude,” a powerful and energetic expression of the exhilaration of conquering a peak and enjoying the mountaintop experience. “Swiftwater” is always a concert favorite and was inspired by sitting on a rock in Yosemite watching water race past and plunge over the edge of a 700 foot cliff. “Prelude” is a gorgeous musical description of snow falling all night, leading into “January,” Davis’ remembrance of his first childhood experience with snow. “Dance in My Heart” is a big, bold piece about feeling free enough to do a happy dance - pure fun set to music! “A Simple Reflection” is spare and gentle with sincere emotion that goes right to the heart - a favorite. “Lost in the Horizon” kicks up the energy level, describing standing at the peak of the highest mountain around, staring off into the distance, becoming intimately aware of nature’s grand scale and losing yourself in its majesty. “Interlude” was one of the first piano pieces Davis composed back in his rock band days as an antidote to the heavy guitars of the band he was in. The title track is another concert favorite. “Tahoma” is the Native American name for Mt. Rainier in Washington State, where Davis first fell in love with hiking and the outdoors, and the piece is both graceful and majestic. The original closing track of the album is “Soul of the Storm,” one of Davis’ signature pieces. With flying fingers and ferocious energy, Davis always amazes with this one whether live or recorded. “Stillwater,” the bonus track is the new ending piece. Closely related to “Swiftwater” but much calmer and more leisurely, it’s a beautiful new take on an old favorite.

Tahoma: Reimagined is a must-have for any fans of Scott D. Davis’ music whether you have the original recording or not. If you are new to his music, this album is essential. It is available from www.inspiringpiano.com, Amazon, iTunes and CD Baby. Recommended!
November 9, 2013
Scott's Website Scott's Artist Page on MainlyPiano
Album Links
Amazon (referral)iTunesSongbook Review
This site contains affiliate links to products. We may receive a commission for purchases made through these links.
More reviews of Scott D. Davis albums 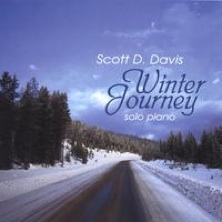 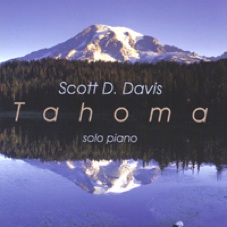 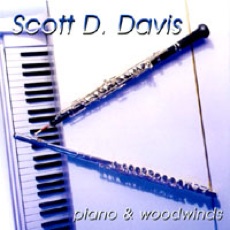