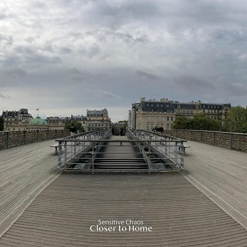 Sensitive Chaos' Website Sensitive Chaos' Artist Page on MainlyPiano
Album Links
Amazon (referral)Apple/iTunesSpotifyBandcamp
This site contains affiliate links to products. We may receive a commission for purchases made through these links.
Closer To Home
Sensitive Chaos
2021 / Subsequent Records
108 minutes
Review by Kathy Parsons
Closer To Home is the eleventh album from Atlanta-based musical collective, Sensitive Chaos, but I have to admit that it's the first for me - an incredible discovery! Founded and fronted by composer/synthesist/producer Jim Combs, the album also features Ryan P. Taylor (guitars and bass), Josie Quick (violin), Brian Good (sax), Mitchell Sosebee (drums and percussion), and Brian Donohoe (sax, clarinet, flute and keyboards). Guest artists include Diane Arkenstone (spoken word), Tom Carleno (12-string guitar), Paul Nagle (synth and sound effects) and Giles Reaves (synth, drums and percussion). The album is available as a two-CD set that includes a booklet with photos and information about the music and the artists; the album can also be streamed and/or downloaded. The two halves of the project are quite different from each other. The first seven tracks are varied in style and instrumentation, often very rhythmic and always fascinating. The last four tracks are much more ambient and atmospheric. Sensitive Chaos' homepage describes the music as upbeat instrumental, down-tempo, ambient electronic, and world-influenced.

Sensitive Chaos' process for creating music is quite unusual. Quoting their website: "For many, music is composed, recorded, and then performed. For Sensitive Chaos, music is composed live, from scratch, in front of an audience, and then brought back to the studio to arrange and record. The songs hope to convey the result of one form of spontaneously composed electronic music, music literally in the ether until it falls like rain through our fingers.... A core component of Sensitive Chaos compositions is live looping improvisation."

The album begins with "Fauna Funk Fusion." Originally mostly percussion, this version includes guitars, saxes, violin, bass, keyboards and various drums and percussion. The strong and infectious beat drives a danceable fusion of jazz/world/rock styles that is musically complex yet fun to listen to. "Snow Laughing Matter" features Diane Arkenstone quoting a short poem by Jim Combs at the beginning and end. In between, a variety of driving rhythms and musical themes weave together to create an intriguing tapestry of sounds and instrumentation. "Fort Hamilton Parkway" is built on "found sound field recordings" from a New York subway station in 1984. Footsteps, birds, ambient sounds and a train are the "instrumentation" for this one. "Backyard Limbo" has a swirling Latin feeling with infectious rhythms and a carefree spirit. Most of the collaborating musicians played on this track. "Cosmic Tune-up" is an otherworldly one-minute "field recording" of an orchestra preparing the instruments for performance. "Cosmic Orchestra" follows with a dreamy and (mostly) ambient mix of atmospheric keyboards, drum machines and percussion, sax and violin. "Fast Driving Open Road" is my favorite track. At 15 1/2 minutes, it has plenty of time to evolve and explore different musical directions, but it's not the longest track on the album. With lots of bass and percussion propelling the other instrumentation, the pace is warm and relaxed with a happy, carefree spirit.

The second half of the album begins with the title track, a very slow, ambient yet rhythmic piece that shimmers mysteriously as it hypnotizes. The calming yet magical "As Night Unfolds" will likely reduce your blood pressure at least a few points, but it's never boring! "Watching Embers Glow" was composed during a live performance and is all Jim Combs and his keyboards. The very slow movement of the piece suggests the gradual change in color of a dying fire and is equally as mesmerizing. The last track on the album is the 30-minute "Kimono My Bliss," which was recorded live on the "Kimono My House" concert series last year. Also all Combs, twinkling glass chimes sparkle against the dark "spacey" background, taking listeners on a journey of their own choosing.