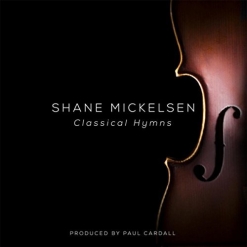 Shane's Website Shane's Artist Page on MainlyPiano
Album Links
Amazon (referral)iTunes
This site contains affiliate links to products. We may receive a commission for purchases made through these links.
Classical Hymns
Shane Mickelsen
2017 / Stone Angel Music
46 minutes
Review by Kathy Parsons
Classical Hymns is the debut album by Shane Mickelsen, a composer/arranger/conductor from Utah. Mickelsen made an indelible mark on the music world as the orchestral arranger, conductor, and pianist/keyboardist on Paul Cardall’s Billboard-topping 2016 masterpiece, A New Creation. He has also arranged music for other artists, including The Piano Guys. Classical Hymns features seven traditional hymns, a beautiful arrangement of the Largo movement of Dvorak’s New World Symphony, and four original compositions that include a three-part Requiem and a tribute to Mickelsen’s daughter. Guest artists include Jon Schmidt and Jenny Oaks Baker on one piece each, and Paul Cardall who produced and provided keyboard FX. Mickelsen’s compositional style has its roots in his love for classical music from JS Bach to Stravinsky, whose rich harmonies he fuses with New Age stylings to create evocative orchestral music. He has earned Bachelor and Master of Music degrees, and started in the Music Composition doctoral program at the University of Utah before deciding to devote himself to a career as a free-lance composer.

Classical Hymns begins with “Reqiuem: Intro,” a somber yet hopeful piece. A requiem is usually composed in honor of someone’s death, and this one is very beautiful. “Come Thou Fount of Every Blessing” features Jon Schmidt on piano with a delicate background of strings before the full orchestra joins in. Focusing on the beauty of the melody, Mickelsen’s arrangement of this classic hymn keeps it fairly simple and very heartfelt. “There Is a Green Hill Far Away” features Jenny Oaks Baker on violin and she sends the inspiring melody soaring. “The Spirit of God” is an LDS hymn performed with the brass section carrying much of the melody. Originally written as a Christmas hymn, “A Poor Wayfaring Man of Grief” was a favorite hymn of Joseph Smith, founder of the LDS church. This arrangement is performed as a lovely piano solo. “Requiem: Gloria” is the second movement of Mickelsen’s “Requiem,” and picks up where the Intro left off. I’ve always loved Dvorak’s New World Symphony and this arrangement of the Largo movement is wonderful. “Annie Jane” is a charming piece composed and dedicated to Mickelsen’s little daughter. Expressing wonder, innocence and grace, it’s a favorite! “Abide With Me” and “Amazing Grace” are both ageless hymns given a soft classical treatment that is soothing and up-lifting. “I Stand All Amazed” is performed as a gentle piano solo. The “Finale” movement of the Requiem brings this exceptional album to a peaceful close with full orchestra and piano.

Shane Mickelsen is off to an amazing start with his debut album! Classical Hymns is available from Amazon, iTunes, and CD Baby. Recommended!
April 25, 2017
This review has been tagged as:
Hymn Arrangements
Shane's Website Shane's Artist Page on MainlyPiano
Album Links
Amazon (referral)iTunes
This site contains affiliate links to products. We may receive a commission for purchases made through these links.