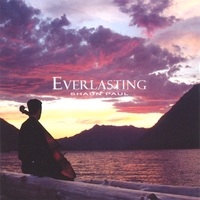 Shaun's Website Shaun's Artist Page on MainlyPiano
Album Links
Amazon (referral)iTunes
This site contains affiliate links to products. We may receive a commission for purchases made through these links.
Everlasting
Shaun Paul
2006 / Shaun Paul Productions
46 minutes
Review by Michael Debbage
One of the rewards of reviewing is being exposed to new music that otherwise would have evaded you due to the lack of opportunity in the mainstream market. Even better, there is the occasional artist that is more than just a simple pleasure but actually a breathtaking listening experience that leaves you scratching your head asking “Why hasn’t this artist already broken into the great wide open?” After listening to the passionate and emotive music of Seattle-based cellist Shaun Paul, "Everlasting" is one of those transcending moments that a reviewer dreams of.

A graduate of University of Colorado, Shaun Paul has been performing and teaching the cello for several years. In 2003, Shaun Paul was inspired to record his own material courtesy of his impressive debut "A Path To Somewhere." The recording was completely self-written, performed and produced by the talented artist and had a rather eclectic sound about it. As was the equally impressive follow-up, " A Walk Through Time" that included some mesmerizing photography on the cover which extended to the equally compelling music. That said, Shaun Paul made significant improvements with the quality of his production and brought a greater focus on catchy classical arrangements with a knack for the details without forsaking the melody.

Clearly Shaun Paul avoided the sophomore jinx that appears to hound many artists, but did he just delay the gremlin or was it going to be three times a charm? One listen to Everlasting will reveal an emphatic yes to the latter as it not only shows exponential production improvement but soars with inspiration. Clearly the artist appears to have found his signature sound of classical orchestration soaked in lush and memorable melodies that will mesmerize you. Clocking in at just over 46 minutes, every second is a gem from start to finish.

The album opens with an ambient piano and cello combination that slowly builds with the percussion stirring things up at the one and a half minute mark. Meanwhile, her successor “Diamonds Of The Sea” is little more moody and temperamental which would be fitting movie soundtrack material. The same can be said for Shaun Paul’s “The Mystery” which has similar affecting ingredients found on “An American Symphony” written by the late great Michael Kamen for the "Mr. Holland’s Opus" soundtrack. Shaun Paul builds on this poignant swell of passion with the equally moving title track, Everlasting, with an enthusiastic orchestral arrangement driven by strings, horns and military-style percussion. It is the longest track on the album, but even six minutes is not enough, leaving you wanting more.

For the first time in three recordings, Shaun Paul includes a composition that was not self-composed and transforms the famous Vangelis composition “Hymne,” though not too much, keeping the spirit of the song in its appropriate context. The song also includes keyboard assistance from Ashley Diaz. That aside, along with piano support from Stephen Jacob on the previously mentioned “The Mystery”, the composing, producing and arranging is all about this mystery magical musician called Shaun Paul.

Released over three years ago, Everlasting is Shaun Paul’s third release, extending his consecutive streak of exceptional recordings. This is heightened by the fact that Shaun Paul has improved upon himself each time he has come out of the recording studio. Everlasting is a breathtaking musical experience and with the cellist currently in the studio, one can only imagine the infinite possibilities of his latest creation.
June 6, 2006
This review has been tagged as:
Michael's Favorites: 2006Michael's Top 30 for the Decade (2000-2009)
Shaun's Website Shaun's Artist Page on MainlyPiano
Album Links
Amazon (referral)iTunes
This site contains affiliate links to products. We may receive a commission for purchases made through these links.