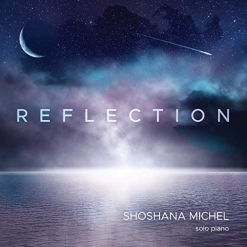 Shoshana's Website Shoshana's Artist Page on MainlyPiano
Album Links
Amazon (referral)iTunes
This site contains affiliate links to products. We may receive a commission for purchases made through these links.
Reflection
Shoshana Michel
2019 / Shoshana Michel
47 minutes
Review by Kathy Parsons
Reflection is Shoshana Michel’s fourth solo piano album and her third album of original compositions. The eleven pieces are a musical autobiography of sorts, inspired by Shoshana’s journey to finding herself as a composer and the life experiences that happened along the way. Recorded at Piano Haven Studio on Joe Bongiorno’s Shigeru Kawai SK7L grand piano, the piano sound is perfect for this music as well as Shoshana’s elegant playing touch - warm, velvety and very expressive.

Shoshana started accordion lessons at the age of seven; classical piano lessons soon followed. When she was 17, she started playing ragtime and honky-tonk piano at Shakey’s Pizza Parlors in Southern CA, and a year later, she was hired by Knott’s Berry Farm in their Roaring 20’s area.

Shoshana’s first album, Soul Whispers (2015) is a collection of Chabad nigunim (songs of Jewish Eastern European origin) and was nominated for that year’s SoloPiano.com Album of the Year award. Wanting to prove herself as a composer, Shoshana started to focus on her own music. After a few tries, the composing blocks she had experienced for many years began to dissolve and the music started to flow. Her first album of original piano solos, Dancing on the Wind (2016), was nominated for Album of the Year by Whisperings, SoloPiano.com and One World Music Radio (Solo Piano category) and received A Global Peace Song Award for “When Leaves Dance.” Prelude to a Dream was released in 2017.

Reflection begins with “A New Day Today,” a brightly optimistic ode to the potential of a new day. “Shooting Stars” is the first single released from the album and is a favorite. Graceful and flowing with a distinctive sparkle, it’s a warm and cozy piece to snuggle up with. “Finding Bliss” overflows with a peaceful, glowing contentment that we’d all love to experience more often. As its title suggests, “Soothing the Tempest Within” is a bit darker and more intense, reflecting those times where frustration and disappointment creep in and working to get past them. “Bittersweet,” a haunting expression of an emotional dichotomy, is another favorite. Gently introspective, the feelings are powerful, solitary and very tangible. “The Moon’s Lament” is a deeply-felt response to the recent natural disasters that have occurred throughout the world. Slow, mournful and from the heart, I love this one! I also really like the changing themes in “In a Time Lapse” that range from fairly quiet and peaceful to swirling and uneasy. My favorite piece on the album is “Labyrinth,” with its expression of swiftly flowing movement blended with feelings of being a bit lost and confused.

I think Reflection is Shoshana Michel’s best album yet! It is available from www.ShoshanaMichel.com, Amazon, iTunes and many of the streaming sites. Fellow pianists will be happy to know that a companion sheet music book is also available.
January 21, 2019
This review has been tagged as:
Kathy's Picks
Shoshana's Website Shoshana's Artist Page on MainlyPiano
Album Links
Amazon (referral)iTunes
This site contains affiliate links to products. We may receive a commission for purchases made through these links.
More reviews of Shoshana Michel albums 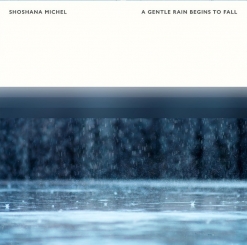 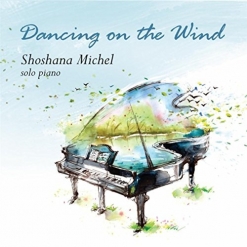 Dancing On the Wind
2016
Kathy's Picks 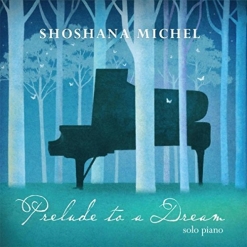 Prelude to a Dream
2017
Kathy's Picks