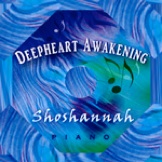 Shoshannah's Website Shoshannah's Artist Page on MainlyPiano
Album Links
Amazon (referral)iTunes
This site contains affiliate links to products. We may receive a commission for purchases made through these links.
Deepheart Awakening
Shoshannah
2006 / SMC Records
55 minutes
Review by Kathy Parsons
Deepheart Awakening is Shoshannah’s second solo piano release this year and her fourth album to date. It is quite different from Soul Journey in that more of the music on this new CD is composed rather than improvised. Shoshannah’s 2000 release, Gifts From Heaven, is her most popular release so far, but that could easily change with Deepheart Awakening. Each composition portrays a specific Biblical or historical event, and much of the music has a cinematic sweep. A child prodigy who was classically-trained beginning at a very young age, Shoshannah’s pianism is dazzling. Although her classical background is clear, her music is highly original with jazz influences and the occasional use of traditional Jewish themes and melodies. Some of the music on Deepheart Awakening is “reinvented” from Shoshannah’s first CD, “Sanctuary.” The music is very powerful, often soothing, and sometimes joyous, and it stands completely on its own with or without knowledge (or even interest) in the historical events being depicted. One of the wonderful things about instrumental music is that the music is open to each individual’s personal interpretation and can “mean” whatever he or she wants it to mean. The variety of playing styles on Deepheart makes it fascinating from beginning to end. A pianist with amazing skills and a top-notch piano can make pure listening magic, and Shoshannah does just that.

The CD opens with “Exodus From Egypt,” an improvisational arrangement on Israel’s national theme, “Hativka.” It tells of the Israelite slaves coming out of Egypt into spiritual liberation. The piece has an infectious energy and sense of excitement. “Splitting Sea Miracle” has a feeling of urgency, describing the Israelites quickly leaving Egypt. Shoshannah very effectively uses a long series of glissandos to depict the parting of the sea and the people walking through the miraculous split in the ocean. “Miriam’s Desert Dance” is a lively and joyous celebration of new-found freedom. “Manna from Heaven” is a graceful improvisation. Gently flowing and absolutely gorgeous, this is one of my favorites. “Matan Torah” begins very quietly and simply, expressing the sounds of a “still small voice.” The thirteen-minute composition builds near the middle, becoming more passionate and celebratory, and then trails off as quietly as it began. My favorite track is the title track, which Shoshannah calls “a transformational piece.” It tells the story of Moses and the Israelites reaching out to the Heavens for forty days with “apologetic tears, which brings about the Divine forgiveness expressed through the receiving of the Tablets from Sinai.” The piece begins almost as a whisper, with open spaces between the notes that are allowed to ring. The next section remains quiet, but is deeply personal and soulful. As the piece evolves, it becomes stronger and more confident, and then goes back to the previous melody and rebuilds strength, becoming beautifully flowing. “Clouds of Glory” is the second improvisation on the CD. The clouds referenced were used by the Israelites as a guide and compass showing them where to set up camp. The piece is gentle and light, with just a touch of bittersweetness. “Hope” concludes the CD with a fourteen-minute tour de force. Dedicated to the artist’s mother, who is a holocaust survivor, the piece is a tribute to all holocaust survivors “with the idea that the soul has an eternal and Divine connection and its spirit never dies in spite of all the human horrific evil experiences.” The music evolves through many themes and emotions, some triumphant, some tragic, all very deeply inspired.

Deepheart Awakening is a stunning listening experience and I highly recommend it! It is available from thehealingpiano.org.
October 2, 2006
Shoshannah's Website Shoshannah's Artist Page on MainlyPiano
Album Links
Amazon (referral)iTunes
This site contains affiliate links to products. We may receive a commission for purchases made through these links.
More reviews of Shoshannah albums 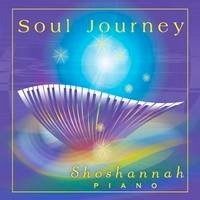