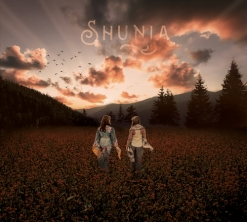 Shunia's Website Shunia's Artist Page on MainlyPiano
Album Links
Amazon (referral)VideosApple MusicSpotify
This site contains affiliate links to products. We may receive a commission for purchases made through these links.
Shunia
Shunia
2021 / Stillpoint Records
53 minutes
Review by Kathy Parsons
Shunia is the second album from Shunia (Lisa Reagan and Suzanne Jackson), a duo that combines compelling melodies, ancient chants and multicultural rhythms to create a unique sound that is both original and timeless. “Shunia” means “stillness” and “receptivity,” but not passivity. Reagan and Jackson composed the eight tracks with award-winning and GRAMMY-nominated producer Jamshied Sharifi, a New York-based composer, producer and keyboardist who has scored several feature films as well as contributing music to television and independent films. Hassan Hakmoun, known as “The Godfather of Gnawa Music,” also appears on two tracks. There is a long list of guest musicians who perform on ancient as well as more modern classical instruments. Four of the tracks have been released as singles (“Akal,” “Sa Re Sa Sa,” “Breeze at Dawn” and “Alleluia”) and have gorgeous music videos that are available on YouTube as well as on www.ShuniaSound.com.

Classically-trained, Lisa Reagan and Suzanne Jackson became friends while attending graduate school at University of Maryland, and both performed with the Washington National Opera for twenty years while launching successful solo careers. Lisa has been recording since she was sixteen and has a released seven albums of her own music. Suzanne is a teacher of yoga and voice in her own studio.

The album begins with “Sa Re Sa Sa,” a joyful chant that celebrates creativity and features vocals by Hakmoun as well as Shunia. If you need something to give your day a lift, be sure to watch the video! “The Breeze At Dawn” is my favorite track on the album. The lyrics are from a poem by the ancient poet, Rumi (1207-1273), and are sung in English. Composed by Reagan and Sharifi, the instrumentation is simpler and more intimate and combine with the words to create a song that is deeply expressive and very haunting. Using words from the 23rd Psalm, “Alleluia” is performed in Latin as well as Gregorian chant and is both soul-satisfying and uplifting; the accompanying video is stunning. “Akal” is “a protective mantra that wraps around animosity and seals it closed.” It was released as a single in 6/2020 “in response to the mournful period of loss in the United States, hoping to lend some comfort” and garnered positive reviews from the USA to India. “Ong Namo” is a hypnotic and stirring chant that “releases us into a vast and endless ocean. Guru Dev Namo gives us the experience of the wise seaman.” Dark and mysterious yet calm and confident, it’s another favorite. The closing track, “Sa Ta Na Ma,” describes the continuous cycle of life and creation: “Sa”= birth, “Ta”=life, “Na”=death and “Ma”=rebirth. The last minute or two of the song is sung in English with words loosely based on the same passage from Ecclesiastes that inspired the song “Turn! Turn! Turn!”

I have to be honest and say that I wasn’t sure I was going to like this album, but I ended up loving it. There is so much heartfelt beauty in both the words and the music, that it’s an album that needs to be savored, not just relegated to background music. Shunia is recommended for group classes or personal practice of yoga, or for simply being inspired and uplifted. Close your eyes and let the music transport you to a more peaceful place.

Shunia is available from Amazon, Apple Music and streaming sites such as Spotify.

January 10, 2021
Shunia's Website Shunia's Artist Page on MainlyPiano
Album Links
Amazon (referral)VideosApple MusicSpotify
This site contains affiliate links to products. We may receive a commission for purchases made through these links.