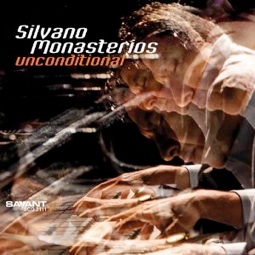 Silvano's Website Silvano's Artist Page on MainlyPiano
Album Links
Amazon (referral)iTunes
This site contains affiliate links to products. We may receive a commission for purchases made through these links.
Unconditional
Silvano Monasterios
2011 / Savant
46 minutes
Review by Kathy Parsons
Unconditional is the fourth release by Venezuela-born pianist/composer/bandleader Silvano Monasterios, who relocated to Miami, FL in 1989 and has become a fixture in the jazz scene there. Classically trained at the esteemed Jose Angel Lamas Conservatory while growing up in Caracas, Monasterios absorbed South American musical traditions and as much jazz as he could find and assimilated these varied influences into a rich and powerful musical style. Beginning his career as a professional musician at the age of eighteen, Monasterios has received an impressive list of awards including “Best Soloist” at the 1989 Miami Jazz Festival, “Outstanding Soloist” at the University of Colorado in 1991, and a music scholarship from the jazz program at the University of Miami, where he earned his BM as well as his Masters Degree. Unconditional features the Fourth World Ensemble which includes Troy Roberts on saxes, bassist Jon Dadurka, drummer Rodolfo Zuniga, and percussionist Jose Gregorio Hernandez, in addition to Monasterios’ piano and keyboards.

The album begins with “Farmacia del Angel,” a tribute to Monasterios’ father who introduced the boy to the joy of making music and was always his greatest source of inspiration. Although the tempo is fairly relaxed, this piece never stops moving. “A Song For Jacques” is a two-part memorial for Jacques Braunstein, a close friend whose weekly radio show in Venezuela gave the young Monasterios his first regular exposure to jazz. “Part 1” is quiet and flowing, demonstrating a different side of Monasterios’ artistry. I love this track! “Part 2” is an upbeat celebration of the life of a dear friend, with the piano and sax soaring heavenward. “Forgotten Gods” was inspired by a visit to the Mayan Riviera and viewing many godlike images once worshipped in the region and now forgotten. Bright and energetic, Monsterios’ piano and Roberts’ sax chops are jaw-dropping. The title track drops the pace down to a graceful, enchanting ballad with a velvet touch on piano and sax - gorgeous! On “Black Saint,” Monasterios switches from piano to keyboards and combines African and South American rhythms to create a piece that is contemporary with traditional jazz roots.

Unconditional is already being labeled a jazz masterpiece and is destined to bring much more attention to Silvano Monasterios and his music. It is available from Amazon and iTunes. Check it out!
July 13, 2011
Silvano's Website Silvano's Artist Page on MainlyPiano
Album Links
Amazon (referral)iTunes
This site contains affiliate links to products. We may receive a commission for purchases made through these links.