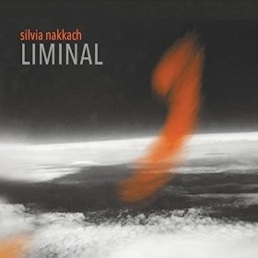 Silvia's Website Silvia's Artist Page on MainlyPiano
Album Links
AmazoniTunes
This site contains affiliate links to products. We may receive a commission for purchases made through these links.
Liminal
Silvia Nakkach
2016 / Vox Mundi New Music Series
54 minutes
Review by Kathy Parsons
Liminal is described in the liner notes as “a gentle journey through fluid sound ambiances and ephemeral voices moving, transforming and dissolving like clouds in the sky. Listening becomes a place where one can go when needing more space.” Although Silvia Nakkach is a Grammy-nominated composer and has released more than a dozen albums over the years, I have to admit that this is my first experience with her music. Her lovely voice becomes the “lead” instrument of the ensemble which features this year’s Grammy winner, Jeff Oster, on trumpet, David Darling on violincello, and Val Serrant on percussion as well as producer Todd Boston, who also brings his impressive artistry with guitar, piano, keyboards, guitarviol, and sound design. In addition to vocals and composing the music, Nakkach provides piano and sound design.

Silvia Nakkach is based in the San Francisco Bay Area and is the founding director of the international Vox Mundi School of the Voice. With a background in North Indian classical music and avant-garde composition, Nakkach has evolved her own style, employing elements of minimal melodicism, electronic liminal sonorities, and orbital rhythmic materials while seeking to transcend the ordinary sense of time and exploring the relationship between music and space. For close to three decades, she has worked to preserve unusual vocal arts through performance, education, and spiritual practice, with ongoing programs in the US, Brazil, Argentina, Japan and India. Nakkach is on the faculty of the California Institute of integral Studies (CIIS), where she created the first certificate program offered by a major academic institution in Sound, Voice and Music in the Healing Arts. She has lectured in many prestigious institutions across Europe, South America, and the US.

Again referring to the liner notes of the album, Nakkach explains the inspiration for the music: “All my life I have been fascinated with the life of the clouds wondering how the impermanence of their movement, formless, and light would translate into music. Sky gazing is for me a spiritual experience. I focus on reading signs hidden in the shape of the passing clouds. This practice also enhances the way I listen to my surrounding world.”

“Liminal” is the first word of the titles of all nine tracks. Defined as “of/or related to a sensory threshold, barely perceptible,” the second words of the titles are: “Clouds,” “Beauty,” “Motion,” “Space,” “Light,” Rays,” “Glow,” “Dream” and “Moon.” Ambient and floating, the music is soothing, peaceful, and easy to get lost in. The various instruments flow from one to another without boundaries or a specific musical form. Not all of the instrumentalists appear on every track, but the tempo is consistently slow and effortless, providing a seamless listening experience for healing, meditation and/or relaxation.

Liminal is a unique and very beautiful album and is available from Amazon, iTunes, and CD Baby.
May 27, 2016
Silvia's Website Silvia's Artist Page on MainlyPiano
Album Links
AmazoniTunes
This site contains affiliate links to products. We may receive a commission for purchases made through these links.