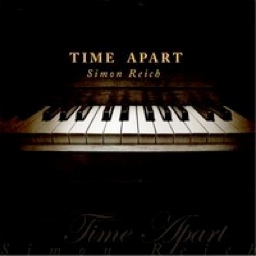 Simon's Website Simon's Artist Page on MainlyPiano
Album Links
SoundCloudAmazon (referral)iTunes
This site contains affiliate links to products. We may receive a commission for purchases made through these links.
Time Apart
Simon Reich
2014 / Simon Reich
35 minutes
Review by Kathy Parsons
Time Apart is an eight-track album of original, mostly piano-based pieces by Australian pianist/guitarist/composer Simon Reich. An active member of the SoundCloud community and an executive member of ThePianoCloud.com, Reich’s music has already garnered an impressive list of awards. His music is also used at University of Western Australia in emotional responses experiments. Most of the pieces in the collection are (electronic) piano with synth strings and/or orchestration. Most began as piano improvisations recorded at home with the lights off, and Reich later added strings where they would be the most effective to enrich the emotional impact of the music. A couple of the tracks are solo piano.

Time Apart begins with “Ashes,” a solo piano improvisation that is melodic, peaceful, and somewhat introspective. “Suspended” is also a solo piano improv that is a bit brighter and more optimistic. In “Breathe,” Reich adds strings to what began as an improv, adding more emotion and drama to the music - I really like this one! “Deep Black” seems to suggest a very dark and mournful piece, but this time it refers to Reich’s preference for improvising and recording in the dark. The piece itself is graceful, flowing and very lovely. Strings again add to the emotional impact of the music while the piano tells its story in a clear, heartfelt voice. I love “Schnee Gefallen,” which translates to “the snow has fallen.” Peaceful, crystalline, and very light, it gently conveys the sparkling quality of the snow as well as the hush it creates. Gorgeous! The last track, “Deep Forest,” goes in an entirely different direction that I would love to hear more of. Calling this a duet with nature sounds (some of which Reich sampled himself), the water, bird, and insect sounds are given an equal emphasis with the humanly-created music, creating a rich sound that is exotic and serene - a very effective and beautiful piece.

All of the tracks from Time Apart are available for listening on SoundCloud. Downloads are available on Amazon, iTunes, and CD Baby. Check it out!
May 11, 2014
Simon's Website Simon's Artist Page on MainlyPiano
Album Links
SoundCloudAmazon (referral)iTunes
This site contains affiliate links to products. We may receive a commission for purchases made through these links.