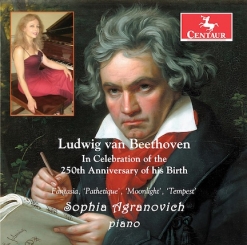 Sophia's Website Sophia's Artist Page on MainlyPiano
Album Links
Amazon (referral)Apple/iTunesSpotifyCentaur Records
This site contains affiliate links to products. We may receive a commission for purchases made through these links.
Beethoven: In Celebration of 250th Anniversary of his Birth
Sophia Agranovich
2021 / Centaur
65 minutes
Review by Kathy Parsons
Sophia Agranovich has released a stunning recording of some of Beethoven's best-loved solo piano works. Can any pianist bring something fresh and new to Sonata Pathetique or Moonlight Sonata? With Ms. Agranovich on the piano bench, the answer is a decisive "Yes!!!" Sometimes referred to as "a tigress of the keyboard," Ms. Agranovich is also an esteemed pedagogue, lecturer, master class clinician, adjudicator and the recipient of numerous teaching awards. I would be very surprised if Ms. Agranovich didn't find these two extraordinary works in her teaching repertoire on a regular basis, and yet she brings such a freshness and enthusiasm to her performance that it's almost like she is getting reacquainted with old friends. The other two pieces on the album are the Fantasia in G minor/ B major, Op. 77 and Piano Sonata No. 17 in D minor, Op. 31 No. 2, "The Tempest." Ms Agranovich has performed in some of the most prestigious concert halls in the world and her students consistently win top prizes in regional, national and international competitions. One of my favorite classical pianists, she is in full command of the piano whether it be with fiery passion or gentle nuance, and it feels almost as if each piece was composed just for her.

Very few (if any) composers have had as powerful an impact on the development of the piano and piano music (actually, all forms of music) as Ludwig van Beethoven. Born in December 1770, the 250th anniversary of his birth continues to be celebrated all over the world with new recordings of his vast musical output. Although concerts have had to be suspended during the COVID-19 pandemic, I have no doubt that once we get past this, there will be many concerts to celebrate the life and music of a true musical revolutionary.

Fantasia in G minor/ B major, Op. 77 was composed in 1809 and is in a state of constant change of key, tempo and style while expressing moods that range from deep despair to an exuberant joy.

Sonata No. 8 in C minor, Op. 13 ‘Pathetique' was composed in 1798 and continues to be one of Beethoven's most popular works. Mood and style changes abound in the three movements of this sonata, making them fun to play despite the demanding skills required to perform them as Beethoven intended.

The first movement of Sonata No. 14 in C minor ‘Quasi una fantasia’, Op. 27, No. 2 ‘Moonlight’ is one of the best-known and dearly loved piano pieces ever composed. Despite the familiarity of the piece, Ms. Agranovich makes it her own. The second movement is much lighter and more playful while the third is powerful, virtuosic and turbulent. All three are played to perfection.

Piano Sonata No. 17 in D minor, Op. 31 No. 2, ‘The Tempest’ was composed in 1801-02 as Beethoven was dealing with his progressing deafness. Quoting Maynard Solomon from the liner notes: "Beethoven was the first who fully merged the tempestuous, conflict-ridden heroic style with the sonata principles." Also quoting the liners: "When Czerny asked Beethoven how to play the first movement, the reply was, 'Break the piano.'" The third movement is the most familiar with some passages light and fluttery and others impassioned and intense.

Sophia Agranovich's selection of pieces to celebrate the anniversary of Beethoven's birth clearly demonstrates the full range of Beethoven's composing styles, moods and passions. Her performance is magnificent and this album is a must! It is available on Amazon, Apple Music/iTunes, Spotify and Centaur Records, to name a few.

February 27, 2021
This review has been tagged as:
Classical
Sophia's Website Sophia's Artist Page on MainlyPiano
Album Links
Amazon (referral)Apple/iTunesSpotifyCentaur Records
This site contains affiliate links to products. We may receive a commission for purchases made through these links.
More reviews of Sophia Agranovich albums 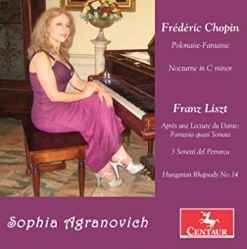 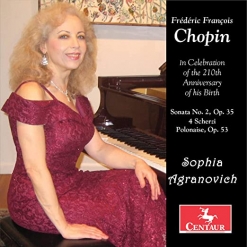 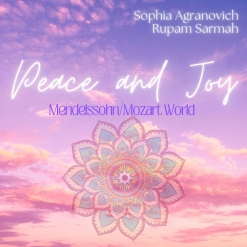