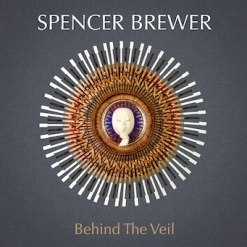 Spencer's Website Spencer's Artist Page on MainlyPiano
Album Links
Parasols in Paris videoAmazon (referral)Apple Music/iTunesSpotify
This site contains affiliate links to products. We may receive a commission for purchases made through these links.
Behind The Veil
Spencer Brewer
2023 / Spencer Brewer Music
48 minutes
Review by Kathy Parsons
It has been more than fourteen years since pianist/ composer/ assemblage artist(!!!) Spencer Brewer released his incredible Cinematic album (2008), and I have to say that his new release, Behind The Veil, was well worth the wait. One of the major players on the Narada Records label in the 1980s and 90s, both as a solo artist and a collaborator with such luminaries as Tingstad and Rumbel, Paul McCandless and Kostia, Spencer has always been an artist who is impossible to categorize into any one genre - especially in his live performances. Several of his piano solos that were in sheet music form became beloved standards in my teaching repertoire, so it was a thrill to have Spencer come to my home (then) in Hercules, CA and do workshops and concerts for students and their families on numerous occasions. Also a piano technician in Northern CA, Spencer started creating his wonderful sculptures and assemblages with leftover piano parts (there are examples on his website).

The twelve tracks on Behind The Veil are varied, although most are on the slower, more melodic side. Some are solo piano and some have other instruments, some are new and some are old favorites dusted off and given a fresh new interpretation, and one is a new arrangement of an old favorite standard. This quote from the liner notes of the CD pretty much says it all:

"Over my lifetime I have had the blessing to create and produce ideas across a wide spectrum of genres. In every event, windows of knowledge, understanding and letting go occurred. This collection of music is me getting out of my own way, listening quietly, allowing what was 'Behind The Veil' to come forth..."

The album begins with "Parasols In Paris," a dreamy, uplifting waltz for piano and strings (Quartet San Francisco). It starts out as a piano solo, and when the strings enter, it makes me think of a romantic movie from the 1950s or 60s - a beautiful start! (There is a music video for this piece on Spencer's site and YouTube.) "And So It Goes..." is a lighter piano solo with a bittersweet, "oh well" kind of tone that is absolutely charming. "Portraits" is the title track from Spencer's 1987 album and is a longtime favorite. This solo piano version clearly indicates how timeless this piece really is. "Myths and Legends," mostly solo piano (there are some choral voices in the background), is a piece that tells a story that is sometimes tender and sometimes more heroic. The title track is exotic and very mysterious - I love it! The changing themes and melody lines also tell quite a story (of your own making)! "Eden" is a Spencer Brewer classic that dates back to his 1987 Portraits album. The earlier recording was more orchestrated, and this one is solo piano, which I find to be even more soulful. Gershwin's "Summertime" has been covered by countless artists and is always a favorite. Spencer's arrangement is for sax (Paul McCandless) with a haunting piano and synth accompaniment - outstanding! "Where We Used To Play" is one of the favorites I worked on with my students. It appeared on the Narada Piano Solos compilation album released in 1992 and has never lost its charm. Sweetness, nostalgia and innocence flow from every note - definitely one of my top favorite Spencer tunes! I also really like "Walls That Move," a piece that appeared on Piano Ocean (2000) and The Heart Aid Project: A 9/11 Benefit Piano Collection (2002) as well as Cinematic. As I remember, the piece was inspired by the moving walls at George Lucas' Industrial Light and Magic Studios in San Rafael, CA. Slow, slightly mysterious and very magical, it's a great close to a great album. Keep 'em coming, Spencer!

Behind The Veil is available from Amazon, Apple Music/iTunes and streaming sites including Spotify. Sheet music for all of these pieces is available from SheetMusicPlus.com and SheetMusicDirect.com. I give Behind The Veil my highest recommendation!
January 6, 2023
This review has been tagged as:
Latest Reviews
Spencer's Website Spencer's Artist Page on MainlyPiano
Album Links
Parasols in Paris videoAmazon (referral)Apple Music/iTunesSpotify
This site contains affiliate links to products. We may receive a commission for purchases made through these links.
More reviews of Spencer Brewer albums 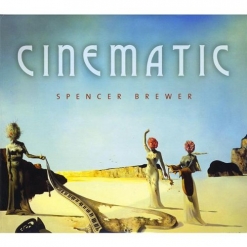 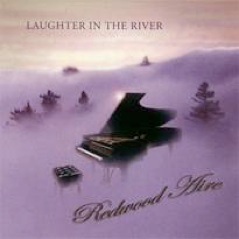