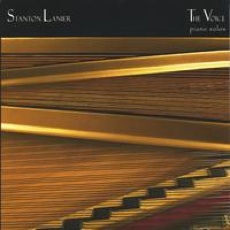 Stanton's Website Stanton's Artist Page on MainlyPiano
Album Links
Amazon (referral)iTunes
This site contains affiliate links to products. We may receive a commission for purchases made through these links.
The Voice
Stanton Lanier
2005 / Stanton Lanier
60 minutes
Review by Michael Debbage
One of the benefits of reviewing is being exposed to a new musical experience that just takes you by surprise. The latest recording by pianist Stanton Lanier appears to fit such an experience, unearthing a profound and moving experience courtesy of his recording The Voice. In this particular case, Lanier allows his fingers to do the talking, churning out reserved yet haunting melodies that make this album one of the year’s best.

Though the artist is new in the “ears of this beholder”, The Voice actually represents Stanton’s fourth recording. His debut album "Walk In The Light" was released back in 2001 followed by "Still Waters" and "Draw Near" released in 2002 and 2004 respectively. All of his material is of high quality and it is very clear that he has a gift for a good memorable melody. Lanier also draws on Scriptural references to help illustrate his compositional inspirations. Unmistakably, his faith in things not seen is of utmost importance as he boldly shares his faith with his listeners.

One thing that sets The Voice apart from his prior achievements is the very high production level. In fact, Lanier spared no expense when he hired Windham Hill founder Will Ackerman as producer and then recorded at the George Lucas Skywalker Sound Studio. Needless to say the technological results of The Voice have managed to articulate a very different artist that is smoother and more refined than his prior endeavors.

While Ackerman’s medusa touch is still very effervescent, he does not perform on the album. The focus as expressed by the prominent photographs of the grand piano makes it very clear what The Voice is all about. In fact, with the exception of the enchanting embellishing vocals of Noah Wilding on “Captivating” and “Peace” and Eugene Friesen’s cello work on “Tears Of Lament” and “Eternity”, it is Stanton Lanier who speaks up with his pure and precise piano work.

Granted the previously mentioned songs are some of the albums many highlights, yet the outstanding results persist even when Lanier flies solo for the remaining nine tracks. There is no better place to discover his deft touch than on the opening track “Secret Things” as well as the title track. Skip forward and lose yourself in the “Resting” where the tempo is just as slow but is also accompanied with many spatial moments. Similar themes are played out on “Quiet Place” with the addition of a poignant melody that will gently sweep you away.

For a slight change in style there is the more classically influenced “Freedom” reminiscent of an early David Lanz. The classical influences are also explored on the previously mentioned “Tears Of Lament” that features the chilling cello work of Eugene Friesen. Closing out with “Eternity” this finale will only prompt you to leave this CD in your player forever for many additional visits.

From the artwork, that includes the lush photography and inspirational Scripture references to the production niceties of Ackerman, Lanier’s gorgeous melodies are in great company ready to carry you away. More subdued and sophisticated than any of his prior efforts, The Voice still speaks volumes, making this album Lanier’s best to date as well as one of the highlights of 2005.
May 5, 2005
This review has been tagged as:
Michael's Favorites: 2005
Stanton's Website Stanton's Artist Page on MainlyPiano
Album Links
Amazon (referral)iTunes
This site contains affiliate links to products. We may receive a commission for purchases made through these links.
More reviews of Stanton Lanier albums

The Voice
2005
Review by Kathy Parsons