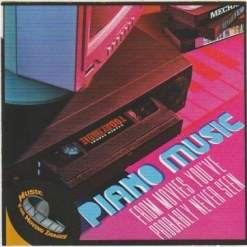 Stephen's Website Stephen's Artist Page on MainlyPiano
Album Links
Amazon (referral)Apple/iTunes
This site contains affiliate links to products. We may receive a commission for purchases made through these links.
Piano Music From Movies You've Probably Never Seen
Stephen Edwards
2021 / Sixfeetfive Music
50 minutes
Review by Kathy Parsons
Piano Music From Movies You've Probably Never Seen is a title sure to get a lot of attention! And it should! Stephen Edwards' album is a collection of nineteen original piano solos from film and television scores he composed over the past 30 years. The music is varied - from classical stylings to stride, jazz, pop and more - and even though the pieces are presented in chronological order from the oldest (1991) to the newest (2021), the album flows beautifully. One of the most in-demand film and television composers in Hollywood, Edwards is an accomplished pianist who has also composed highly-acclaimed orchestral and choral compositions that have been performed at Carnegie Hall and The Vatican. He has also produced two of his own films, Requiem For My Mother (2017) and the documentary Syndrome K (2019), with more in the works. The liner notes of the CD list all of the films the music came from as well as some interesting details about the films and Edwards' approach to each piece. It's a fascinating collection and will see how many of these films I can find!

I can't write about all nineteen tracks, but here are some highlights. Piano Music From Movies You've Probably Never Seen begins with the light and playful "Bed to Hayknife" and the darker and more foreboding "Jen's Theme" from Midnight Fear (1991), the first film Stephen Edwards scored. For "Waltzing On the Promenade" from Titanica (1992), the producers wanted Edwards to imagine being the piano player at a party on The Titanic with wealthy guests dancing to his music. The theme is light, but not quite carefree. One of my favorites is "The Minister's Wife" (1993), a slow, very dark classical theme with a powerful emotional impact. "Man With a Gun" (1995) is the solo piano version of the closing theme for that movie - one of the few themes with the proviso that it be jazz. "Project Shadowchaser 3" (1995) very effectively depicts the "desolation and loneliness of the void that is outer space - where music can never be heard anyway." "Intervention Main Title" (2009) is the only movie Edwards has scored with just piano (with a little synth here and there). He layered the piece using a variety of effects and "prepared piano" so this one has a different sound that's both mysterious and a little spooky! The two pieces from Requiem For My Mother (2017) couldn't be more different. The first is a light and breezy stride piano arrangement of the "Requiem Aeternam" for choirs and orchestra and the second is a quiet and thoughtful piano transcription of "Agnus Dei," the only a capella choral movement of the Requiem. "Syndrome K Main Title" (2019) is the theme from the documentary about three Italian doctors who made up a fake disease in order to save Roman Jews from deportation to the Nazis in WWII. This piano solo was transcribed from the orchestral version used in the film. Poignant yet hopeful, it's an elegant beauty! The album closes with the theme from Death Link, currently in post-production. Darkly mysterious with an intense sense of foreboding, I hope the movie is as good as this theme!

I have really enjoyed reviewing Piano Music From Movies You've Probably Never Seen and getting acquainted with Stephen Edwards' music! In a year with a lot of great new music, this one still stands out as one of the best! The album is available from Amazon, Apple Music/iTunes, Spotify and other streaming sites. Give it a spin!

August 12, 2021
This review has been tagged as:
Latest Reviews
Stephen's Website Stephen's Artist Page on MainlyPiano
Album Links
Amazon (referral)Apple/iTunes
This site contains affiliate links to products. We may receive a commission for purchases made through these links.