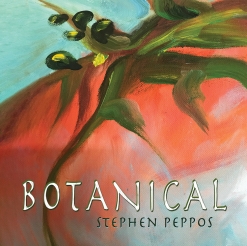 Stephen's Website Stephen's Artist Page on MainlyPiano
Album Links
Amazon (referral)Apple/iTunesSpotify
This site contains affiliate links to products. We may receive a commission for purchases made through these links.
Botanical
Stephen Peppos
2021 / Sonic Bear Music
59 minutes
Review by Kathy Parsons
Botanical is the ninth "new age" album from Stephen Peppos, an artist who never seems to do the same thing twice. Most musical artists develop a distinctive sound over the years, but Peppos has been taking his music in different directions since his 2008 debut, Vertigo. What is consistent from one album to the next is the stellar quality of the music and the recordings themselves. Stephen's amazing versatility makes more sense when you realize that he has produced more than 2000 tracks for his original music libraries, composed national TV jingles, and worked with some of the best music library companies in the world. A six-time Telly Award winner, his television credits are more than impressive and he's also composed music and sound design for many professional and regional stage plays. In a nutshell, Stephen Peppos can do pretty much anything with music and do it well. In addition to composing the music for Botanical, Peppos played all of the instruments, and also produced and engineered the album.

Composition for the music on Botanical started in 2015 and was completed in 2021. Quoting Stephen: "I had so much fun with this album, and I hope it comes through to the listener." Oh yeah, loud and clear! From spicy tropical rhythms to subtle ambience, from slow grooves to toe-tappers, instrumentation is as varied as the music: harp, flute, piano and keyboards, animal voices, strings, bells, guitar, dulcimer, various percussion instruments and more. Earthy, fresh and a whole lot of fun, Stephen Peppos takes us places he's never taken us with his music before and I'm lovin' it!

Botanical begins with "Morning." Its relaxed slow groove and gentle harp and flute melodies are backed with keyboards and light percussion. Peaceful and optimistic, it's a great start to the day as well as to the album! Flute and synth carry the lead on "Above The Trees," a piece that floats easily and effortlessly, reminding us to look up and see the wonders that often appear over our heads. Both ambient and rhythmic, it's a bit of musical magic! "Dancing Dahlias" cranks up the beat with a whimsical vision of dahlias grooving their top-heavy heads in the breeze. Keyboards and vocal accents and the infectious rhythm will have your head bobbing right along with them! The title track is a favorite with its compelling array of percussion instruments, animal sounds, strings and bells, not to mention the driving rhythm. I could listen to this one all day! The very aptly-titled "Sunshine" brings in kalimba, African chants, sticks and percussion as well as atmospheric keyboard sounds. Just try to keep your feet still with this one! Warm, driving and full of fun, it's a favorite! Light and buoyant, "Joy in the Summer" is sure to bring a smile. "Nocturnal" is another favorite with its leisurely pace, harp and synth melodies, and soothing peaceful feeling - perfect for a beautiful slow dance in the garden! "Hope a New" features synth strings, cello, viola, and orchestra. Soothing and ambient for the first few minutes, a stronger rhythm kicks in at about the half-way point as the orchestra enters and builds to the end. Hope is a very powerful force and this piece is a great way to end this excellent album! Both thumbs up!

Botanical is available from Amazon, Apple Music/iTunes and streaming sites such as Spotify.

October 18, 2021
Stephen's Website Stephen's Artist Page on MainlyPiano
Album Links
Amazon (referral)Apple/iTunesSpotify
This site contains affiliate links to products. We may receive a commission for purchases made through these links.
More reviews of Stephen Peppos albums