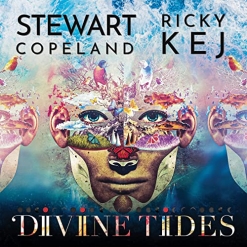 Stewart's Website Stewart's Artist Page on MainlyPiano Ricky's Website Ricky's Artist Page on MainlyPiano
Album Links
Amazon (referral)Apple/iTunesSpotifyYouTube videos
This site contains affiliate links to products. We may receive a commission for purchases made through these links.
Divine Tides
Stewart Copeland and Ricky Kej
2021 / Ponderosa Music Records
33 minutes
Review by Kathy Parsons
Divine Tides is a stunning collaboration by legendary drummer/percussionist Stewart Copeland (The Police) and Indian composer/keyboardist Ricky Kej. The album was recently nominated for the Grammy Award for Best New Age Album, and very deservedly so! The album features singers and musicians from all over the world and celebrates "the magnificence of our natural world and the resilience of our species." Ricky Kej won a 2015 Grammy for his collaboration with Wouter Kellerman, Winds of Samsara, and Stewart Copeland has had five previous Grammy wins. Noted guest artists include Sangeeta Kaur (vocals), Manoj George (violin), Jordan Buetow (harp), Wouter Kellerman and Ron Korb (flute) and Ladysmith Black Mombazo (vocals). There are music videos for eight of the nine tracks on the album that are visually enchanting and offer a much deeper understanding of the music since none of the lyrics are in English.

Divine Tides begins with "Wonders of Life," a serenely beautiful piece that features sitar, a variety of percussion instruments, gentle vocals, flute, keyboards and strings. The video for this piece is a must-see with its fascinating variety of creatures from around the world. The video for "Himalayas" was filmed at an elevation of over 12,000 feet, and both the video and music showcase the pristine beauty and the spiritual aura of the Himalayas."Our Home" is a haunting piece that features Ron Korb on flute and Sangeeta Kaur's beautiful vocals - a favorite! The lively and exotic "Art of Devotion" features Varijashree Venugopal on lead vocals and flute, and Sumarani on sitar. Based on Beethoven's Symphony #6, "Pastoral India" includes a variety of percussion instruments, vocals, flute, sitar, strings and keyboards - a joyful and fascinating blending of cultures and time periods! There are a few very profound quotations that go with the video for "Gandhi."The first is a favorite from Mahatma Gandhi: "The greatness of a nation and its moral progress can be judged by the way its animals are treated." At the end of the video, it says "Every living being, even the tiniest, maintains the delicate balance that keeps us all alive." That's something we all need to remember and live by! The music includes Santhosh Chandran on guitar, Bangalore Women's Choir, strings, and vocals by Ustad Sultan Khan. The warm and dreamy music is even more effective while watching the video of a wide variety of frogs in their native habitat. The closing track, "Mother Earth," was originally composed by Ricky Kej for the score of Sir David Attenborough's film, Wild Karnataka, a tribute to the magnificent bio-diversity of the Southern Indian state. The piece was completely reimagined for Divine Tides and is even more uplifting with the video footage.

What a magnificent album and what a profound message it imparts! Divine Tides is available from Amazon, Apple Music/iTunes and streaming sites like Spotify and YouTube. Don't miss it!