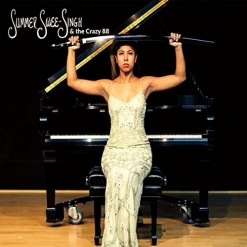 Summer's Website Summer's Artist Page on MainlyPiano
Album Links
Amazon (referral)iTunes
This site contains affiliate links to products. We may receive a commission for purchases made through these links.
Summer Swee-Singh & the Crazy 88
Summer Swee-Singh
2016 / Summer Swee-Singh
41 minutes
Review by Kathy Parsons
Summer Swee-Singh & the Crazy 88 is the debut album by Southern California pianist/ composer/ keyboardist/ music director/ film scorer/ arranger/ and piano consultant Summer Swee-Singh. To preface this review, I want to mention that when I was in the piano area of NAMM (National Association of Music Merchandisers) last month, I heard some dramatic music coming from the back of the room and had to see who it was. If you’ve ever been to NAMM, you know how noisy it is with so many instruments being played at once, but this music really grabbed my attention. I walked back to hear the music more clearly and was surprised to see a familiar-looking young woman playing the magnificent Shigeru Kawai. I had received a CD for review from Summer Swee-Singh the week before, but had not yet listened to the music. I went closer to read her name-tag while she played. Yep - Summer Swee-Singh. We chatted a bit and then Summer continued to play. Dramatic, passionate, and played with an elegant and masterful touch, I was beyond impressed. Although there is nothing like a live performance, I am equally impressed with her recorded music. Classically-trained from a very young age, Summer’s original music has a strong classical influence, but it also has a timeless quality that comfortably resides in the present. Most of the ten tracks are solo piano, but a few include guest artists on strings, guitar and cajon (a box-shaped percussion instrument). With more awards and credentials than I have room for here, Summer Swee-Singh is an artist poised for stardom, and I can’t wait to see it happen!

Summer Swee-Singh & the Crazy 88 begins with a short prelude called “Hello, My Name Is Summer.” In 32 seconds, she gives a glimpse of her virtuosity and versatility. A 2010 graduate of UC Berkeley, I assume that “Berkeley” is a reflection of her time there. A variety of themes expressing different moods are woven together to tell a story. Mostly a piano solo, it includes a short passage with violin performed by Siranush Mukhsi-Hoveyan. “JFN” seems to be the centerpiece of the album and is my favorite track. (I’m pretty sure this is the music that caught my attention at NAMM.) The emotions expressed in this amazing piece range from tender to turbulent, demonstrating Summer’s powerful command of the “crazy 88” and the depth of the passion in her playing. WOW!!! “Samina” is a duet for piano and viola (Nils Bultmann) that is both dark and dramatic. “Selina and Dil” is one of four pieces that were improvised and recorded in one take on a wonderful Ravenscroft piano in Arizona - gorgeous! “Mikael,” also improvised, is one of the softer and quieter pieces on the album, but is no less emotionally expressive - also a favorite. “Apples and Tea” (improvisation) begins with a playful treble intro that becomes a jazzy bass pattern that goes darker and more energetic. The piece continues to evolve in different directions, incorporating a variety of themes, some of which repeat and some that don’t. It’s fascinating how Summer is able to weave together so many differing musical thoughts and have the music stay so cohesive. “27” is partially based on music she wrote for a short film and partly improvised. Melancholy, reflective, and achingly beautiful, it brings this incredible album to a peaceful close. Again, I am SO impressed!

Summer Swee-Singh & the Crazy 88 leaves me breathless each time I listen to it, and I give it my highest recommendation! It is available from www.SummerSweeSingh.com, Amazon, iTunes, and CD Baby. Guaranteed to be a Favorite Album of the Year!!!

February 20, 2017
This review has been tagged as:
Debut AlbumsKathy's Favorites: 2017Kathy's Picks
Summer's Website Summer's Artist Page on MainlyPiano
Album Links
Amazon (referral)iTunes
This site contains affiliate links to products. We may receive a commission for purchases made through these links.