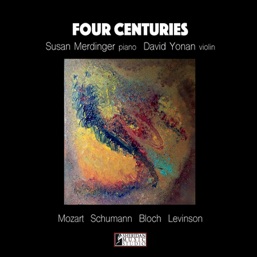 Susan's Website Susan's Artist Page on MainlyPiano David's Website David's Artist Page on MainlyPiano
Album Links
iTunes
This site contains affiliate links to products. We may receive a commission for purchases made through these links.
Four Centuries
Susan Merdinger and David Yonan
2015 / Sheridan Music Studio
62 minutes
Review by Kathy Parsons
Four Centuries is a breath-taking duo recording by pianist Susan Merdinger and violinist David Yonan. The title, of course, refers to the time span of the composition of the music that includes works by Wolfgang Amadeus Mozart (1756-1791), Robert Schumann (1810-1856), Ernest Bloch (1880-1959), and Ilya Levinson (1958- ). One might think that such a wide time frame would result in an album of very unrelated tracks, but while the music is varied, it all fits together beautifully. Merdinger and Yonan are both masters of their instruments and exceptionally versatile in their repertoires, as this album so clearly demonstrates. The four composers are favorites of the artists, and the music was chosen for its “great emotional expression, marvelous interplay between the instrumental voices and a subtle form of virtuosity, which never supersedes the musical content.” (quoted from the liner notes). The recording resulted in David Yonan winning First Prize in the Alexander and Buono International String Competition, in NYC, and he will make his Carnegie Recital Hall debut on October 25th, 2015, with Merdinger at the piano, performing Igor Frolov's “Fantasy on Gershwin's Porgy and Bess.” The duo was also awarded a Silver Medal in the Global Music Awards

Susan Merdinger, a Steinway Artist, has won an extraordinary list of awards from competitions all over the world, beginning as a young adult. Her vast repertoire spans four centuries and she regularly performs as a soloist with orchestras, recitalist, duo pianist, and as a collaborative pianist with distinguished members of the New York Philharmonic, the New Jersey Symphony, and Chicago Symphony Orchestra. A champion of new music, Merdinger received her formal education from Yale University, the Yale School of Music, the Manhattan School of Music, the Westchester Conservatory of Music, and the Ecole Normale de Musique in France, as a recipient of numerous scholarships and awards.

Internationally acclaimed concert violinist David Yonan was born in Berlin and was quickly recognized as a child prodigy after winning the Berlin Youth Competition at the age of ten. He made his recital debut in Berlin, Moscow, and St. Petersburg at eleven and debuted a year later as a soloist with the Berlin Symphony Orchestra. Named as one of the most gifted violinists of his generation, Yonan has toured throughout the US, Europe and South America as a soloist and recitalist. He is also the Founder and Artistic Director of the Fine Arts Music Society and Festival Chicago.

The music is presented in chronological order, beginning with Mozart’s Sonata #13 for Piano and Violin in B-flat major, K.454, composed in 1784. The first and third movements are often lively and playful, and in addition to playing the music to perfection, the artists express the profound joy in playing music with a kindred soul. The more poignant second movement is lyrical and gorgeous, played with a sensitivity that is almost fragile. Schumann’s Sonata for Violin and Piano #1 in A minor, Op. 105 (1851) is the first of two piano/violin sonatas he composed. Passion, turbulence, and deep emotion run through all three movements, revealing evidence of the alarming mood swings Schumann was already suffering at the time. Bloch’s Suite Hebraique for Violin and Piano (1923) is a three-movement work inspired by the Jewish soul, ”the complex, glowing, agitated soul that I feel vibrating though the Bible.” The final selection, Ilya Levinson’s “Elegy: Crossing the Bridge, for Violin and Piano” (2011) was dedicated to David Yonan and this is the Official World Premiere Recording of the piece.

Four Centuries is both masterful and compelling, and it is always a thrill to listen to such accomplished musicians. The album is available from iTunes and CD Baby. Recommended!
October 9, 2015
This review has been tagged as:
Classical
Susan's Website Susan's Artist Page on MainlyPiano David's Website David's Artist Page on MainlyPiano
Album Links
iTunes
This site contains affiliate links to products. We may receive a commission for purchases made through these links.
More reviews of Susan Merdinger albums 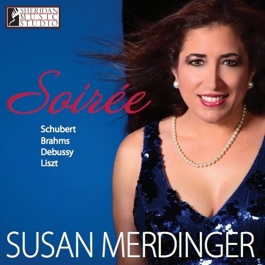